Income tax; changes to USC and PRSI and levies on carbon usage, motoring and food supplements all feature 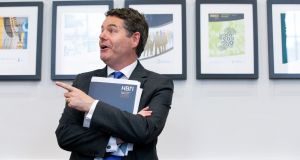 Minister for Finance Paschal Donohoe had asked the group to look at how property funds operated here amid concern they were crowding out potential home buyers.

The group considered and costed Taoiseach Leo Varadkar’s pledge to lift the threshold at which workers pay the higher 40 per cent rate of income tax. It currently kicks in at incomes above €35,300, Varadkar wants to raise this to €50,000, albeit on a phased basis over five years, in a bid to ease the tax burden on low and middle income workers, which is seen as high by international standards.

The tax strategy group says this would cost €2.3 billion if implemented in one year. If done in stages, it said that a €3,000 increase to all standard rate bands in one year would cost €524 million in the first year, and €610 million in a full year.

The Government has promised to merge the universal social charge (USC) and pay-related social insurance (PRSI) in a bid to simplify the tax code. However, the tax strategy group says this would be an extremely complex undertaking, involving a trade-off between a simple design, a loss of revenue to the State and losses and gains for taxpayers.

Separately it suggested that the current PRSI (social insurance) regime was lower than in other countries and that consideration should be given to raising contribution rates over a five- to 10-year period, with annual increases of a quarter or a half percentage point.

It also suggested that raising the threshold for the higher 4.5 per cent rate of USC could be used to ease the tax burden on low to middle-income earners.

The Government’s green credentials were called into question last year after it left the carbon tax rate unchanged at €20 per tonne in the budget. It has, however, promised to raise this to €80 per tonne by 2030 as part of its climate action plan.

The group suggested additional carbon tax revenues should be ring-fenced for the purposes of enhancing the current Sustainable Energy Authority of Ireland grant scheme for household energy efficiency improvements and to fund sustainable transport infrastructure.

The group also proposed changes to the motor tax regime, including increasing the number tax bands for Vehicle Registration Tax (VRT) from 11 to 14 and changing the rates.

The recently introduced 1 per cent diesel surcharge would be replaced by a new levy set against a vehicle’s Nitrogen Oxide (NOx) emissions. The group also considers the removal of the current €1,500 tax relief on conventional hybrids and €2,500 relief on plug-in hybrids.

It makes the case that if these were removed these vehicles should still benefit from the reduced lower VRT rates.

Consideration should also be given to further increasing the rate of commercial stamp duty, the group said. Minister for Finance Paschal Donohoe controversially trebled it to 6 per cent in Budget 2018.

Concern that this would dampen investment in the commercial property sector have proved unfounded, the group said, while suggesting a further 1 per cent hike could raise another €94 million in annual revenue for the exchequer.

Food supplements, which amounted to a €60 million market in 2016, according to Revenue, are also likely to come under the VAT regime in the October budget with the tax strategy group suggesting there is no legal basis in the EU to zero rate such supplements as has been done in Ireland for many years.

It said, however, that certain foods for specific groups, such as baby milk formula, as well as folic acid and other vitamins and minerals classified as medicines, and fortified foods, are unlikely to be affected by any change in the tax treatment for supplements.

The group also considered the cost to the exchequer of increasing the limit on the relief offered to entrepreneurs selling their businesses to €15 million, which was put at €84 million.

The relief, introduced in the 2015 Finance Act, means capital gains tax is charged at a discounted 10 per cent rate on any profits from the disposal of certain business assets up to a lifetime limit of €1 million.

The tax strategy group also tackled two controversial issues central to the Irish economy, namely the how much tax is being paid by property funds – Reits, Irish Real Estate Funds (Irefs) and so-called Section 110 vehicles – and corporation tax, albeit without recommending any major change to the tax code in either area.

Minister for Finance Paschal Donohoe had asked the group to look at how property funds operated here amid concern they were crowding out potential home buyers.

Apart from noting that the dividends paid by Reits to their shareholders rose tenfold to €93.5 million in the four years to 2018, it makes no recommendations on how these entities could be taxed.

Amid concern the tide may soon go out on the State’s €10 billion corporation tax bonanza, the group simply noted the highly concentrated nature of the tax base again without recommending any change.

1 Restaurants file court actions against insurers over lockdown losses
2 Could your old car be giving away all your secrets to its new owner?
3 Brexit: System agreed for Irish goods to skip checks on UK trade
4 High Court appoints interim examiner to Compu b parent company
5 Income tax receipts prove remarkably resilient to coronavirus
6 How to further divide the economy using the wage subsidy
7 Why are markets booming when a crash is on the way?
8 Former Worldspreads chief Conor Foley faces €730,000 fine
9 VAT cuts are for businesses – consumers will still pay the same
10 No free lunch on coronavirus cash payments
Real news has value SUBSCRIBE