Focus now likely to switch to growth and inflation 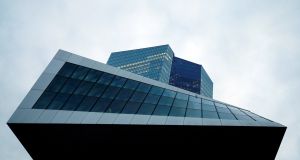 The euro zone‘s economy has moved into a full-fledged expansion, the region‘s top policymakers have said in a declaration that their sweeping measures to restore growth to the single currency area have had the desired effect.

Minutes of the European Central Bank‘s December policy vote show that favourable data on the economy had led policymakers to drop some their references to the region‘s recovery and instead focus more on what they now viewed as a “continued robust and increasingly self sustaining economic expansion.”

The account of the vote, which took place on December 14th, also suggests that the strength of the expansion could, in the months ahead, lead policymakers to change their message and focus less on their monthly bond purchases and more on the combination of measures they plan to keep in place to revive growth and inflation.

The ECB will buy €30billion of bonds a month between now and September. The bank is expected to keep interest rates at their current record lows until the middle of 2019 – policymakers have promised to hold borrowing costs where they are until way beyond the horizon of their bond buying.

The December vote saw president Mario Draghi reveal that the ECB’s staff had upgraded its forecasts for growth to 2.4 per cent in 2017 and 2.3 per cent in 2018 – the most significant in the history of the bank’s quarterly projections for growth and inflation. Households and businesses in the region are expected to keep spending, which investment activity is also forecast to pick up.

It was on the basis of considerations such as these that the ECB’s 25-member governing council “expressed confidence that the euro area economic recovery had now moved into expansionary territory”.

Crucially, the much discussed “output gap”, which refers to the gap between where growth now is and where it would be were the economy operating at its full capacity, would close “in the near future, earlier than previously projected”.

Some economists have interpreted the ECB’s latest projections as showing that the output gap closed towards the end of 2017.

The ECB accounts cautioned into reading too much into the closing of the gap – flagging that calculating the size of the output gap was fraught with difficulty and caution was needed.

While the ECB staff projections showed inflation, at 1.7 per cent, remaining under the ECB’s target of just below 2 per cent in 2020, policymakers were confident that price pressures would return.

The expansion meant “it was seen as very likely that capacity constraints would become increasingly binding and lead to higher price pressures. It was also remarked that the positive feedback loop between economic growth and price increases could, once more firmly established, operate more rapidly than expected.”

On changing the message, the accounts said: “Looking ahead, the view was widely shared among members that the Governing Council’s communication would need to evolve gradually.” They added: “The language pertaining to various dimensions of the monetary policy stance and forward guidance could be revisited early in the coming year.