China’s economic growth beats expectations in 2017 as it hits 6.9% 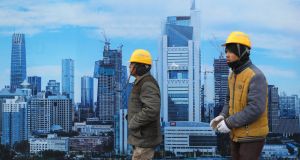 China’s gross domestic product grew 6.9 percent in 2017, according to a report of the National Bureau of Statistics. Photograph: Wu Hong/ EPA

China’s gross domestic product (GDP) expanded 6.9 per cent in 2017, beating both the official target and analysts’ forecasts, and marking the first time the world’s second biggest economy has quickened since 2011.

GDP growth in the fourth quarter was 1.6 per cent quarter-on-quarter, compared with revised growth of 1.8 per cent in the July-September quarter, data from the National Bureau of Statistics (NBS) showed.

This compared with an analysts’ forecast of 1.6 per cent growth on a quarterly basis.

“The Chinese economy has been stable and improving and its performance is better than expected,” Ning Jizhe, head of the NBS, said in a statement.

The government has been trying to reconfigure the economy and maintain growth while reining in public debt and getting rid of polluting industries.

There had been clues the figure would be better-than-expected. Earlier this month, premier Li Keqiang, the Chinese leader charged with managing economic affairs, said the 2017 expansion was about 6.9 per cent on the back of better-than-expected exports, fiscal revenue, household income and corporate profits.

The positive signs for the Chinese economy include the consumption boom. Retail sales increased by 10.2 per cent in 2017 year-on-year, down from 10.4 per cent in 2016, the NBS said.

Real estate investment growth rose by 7 per cent, compared with

The last time the Chinese economy clocked up full-year acceleration like this was in 2010, when it overtook Japan to become the world’s second-largest economy, and China is getting closer to overtaking the US as the world’s biggest economy.

Data from the International Monetary Fund show China contributes more than a third of world growth on a purchasing power parity basis.

Among the risks facing the Chinese economy this year is trade protectionism.

In an interview with Reuters, president Donald Trump suggested that his administration would take retaliatory trade action against China to fight the yawning trade gap between the two countries.

“We have a very big intellectual property potential fine going, which is going to come out soon,” Mr Trump said, without giving details.