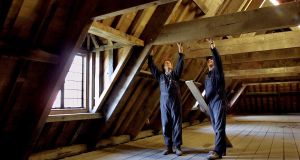 The rise in household savings as spending was curtailed during the pandemic appears to have prompted many to consider home improvements in the coming year. Photograph: Joe O’Shaughnessy

Consumer confidence stalled in July as worries about the weakness of the economy came to the fore, according to a survey by Bank of Ireland that measures both business and consumer sentiment.

The bank’s index of consumer sentiment fell to 55.5 this month, a drop on June and 26 points lower than a year ago. Some 55 per cent of households said they were holding out on spending, down from 61 per cent at the height of the pandemic crisis.

The mood among businesses improved in July to 63.4, significantly up on June’s reading but almost 20 points down on a year ago. Expectations of further gains in the near term were tempered by consumer caution and speculation about a further delay in the move to phase four.

“The move to phase three of the reopening roadmap helped raise business sentiment but with public health officials pointing to worrying trends relating to the virus and speculation that the move to phase four may be postponed, the rebound in household confidence stalled,” said Bank of Ireland chief economist Loretta O’Sullivan.

“Consumer sentiment data for the US, the euro area and the UK show a similar pausing in July and clearly illustrate that the process of rebooting economies across the world will not be perfectly smooth,” she added.

Where housing was concerned, both buyers and sellers were more positive in July. Sentiment was measured at 50.4 in July, up 17.5 points on last month but still more than 42 points lower than a year ago. Some 41 per cent of people think now is a good time to buy, up from 30 per cent in April. Meanwhile, the rise in household savings as spending was curtailed during the pandemic appears to have prompted many to consider home improvements or renovations over the coming year. Some 31 per cent said they were likely to spend a large sum of money on improvements.

Bank of Ireland’s economic pulse is conducted in conjunction with the European Commission and is carried out by Ipsos MRBI. Some 1,000 households and about 2,000 businesses were surveyed.