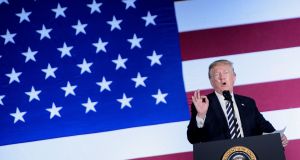 The Chinese government is inviting Wall Street’s top bankers to a hastily arranged meeting in Beijing as US president Donald Trump threatens to impose punitive tariffs on all Chinese exports to the US worth an estimated $267 billion (€230 billion).

According to three people briefed on the initiative, Chinese Communist party officials have invited the heads of America’s leading financial institutions to attend a “China-US Financial Roundtable” in Beijing on September 16th, followed by a meeting with Wang Qishan, vice-president of China.

“Those of us in the financial industries of both countries realise that we have an obligation to help improve US-China relations,” said one person involved in the roundtable. “This relationship is too important to be wrecked by a few people.”

The move comes as Mr Trump on Saturday tweeted that Apple should make its products in the US rather than China. Apple said on Friday that the proposed tariffs would affect prices for a “wide range” of Apple products, including its Watch, but it did not mention the iPhone.

US executives invited to attend next week’s event include Stephen Schwarzman, the Blackstone chairman, along with the heads of Citigroup, Goldman, JPMorgan, Morgan Stanley and former Treasury secretary Hank Paulson. The invitations were sent by Fang Xinghai, a vice-chairman at China’s securities regulator and a former aide to vice-premier Liu He, who has been leading Beijing’s efforts to avoid an all-out trade war with the US.

However, many of the US financial institution heads invited will not be able to attend, largely because the Chinese government organised the event at short notice. Blackstone will be represented by Jon Gray, its president, and Goldman Sachs by John Waldron, the group’s investment banking co-head. Mr Paulson will miss the event.

“They only put this together in the last few weeks and September is booked long in advance,” said one person familiar with the arrangements.

“It was short notice and we are trying to get someone there,” added another person whose chief executive will not be able to attend.

Over recent months Mr Trump has imposed or threatened punitive tariffs on Chinese exports worth $250 billion for allegedly unfair trade and investment practices. On Friday he said he might also target the remainder of China’s exports to the US. China has so far responded in kind and will tax an additional $60 billion of US exports if Mr Trump proceeds with his next tranche of tariffs. Last year China’s imports from the US were valued at $130 billion, while its exports to the world’s largest economy exceeded $500 billion.

People briefed on the planning for the China-US Financial Roundtable said it reflected the Chinese government’s frustrations in dealing with Mr Trump, who has refused to designate a point person for China relations and has increasingly deferred to the hawkish views of Robert Lighthizer, the US trade representative.

Beijing had hoped to continue a series of “strategic and economic dialogues” with Washington that were established by Mr Paulson and Mr Wang in 2006. But Mr Trump discontinued the semi-annual meetings.

“The Chinese can’t really get their heads around the fact that there’s nobody to deal with [in the Trump administration],” said one person who recently met with Chinese trade negotiators. “They can’t get a trade deal or even a framework for a deal.”

President Xi Jinping’s administration has also found that its most trusted interlocutors on Wall Street appear to have little sway over Mr Trump.

China has been opening up its financial sector in recent months, a move that some Wall Street groups hope to benefit from. Since Beijing raised the cap on foreign ownership of securities trading and fund management companies from 49 per cent to 51 per cent in April, several big US banks have said they aim to gain majority control of their operations in China.