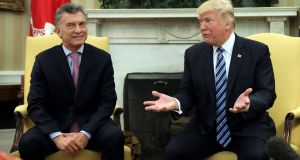 Argentina will impose taxes on exporters to boost much-need revenue and will balance its budget a year earlier than planned after the peso collapsed last week and investor concern grew about the government’s ability to finance itself.

Argentina will also eliminate about half of the current cabinet ministries to reduce spending, president Mauricio Macri said in an almost 30-minute speech that started more than an hour later than planned.

The government will target balancing its budget next year and seek a surplus in 2020, Treasury Minister Nicolas Dujovne said at a press conference after Macri spoke.

“To cover the shortfall during this transition we are going to ask those who have the greatest ability to contribute to pay,” Macri said. “It is a failure to not reach a balanced budget. This isn’t any other crisis. It has to be our last one.”

The changes are intended to signal a shift in the government’s strategy as it heads into talks on Tuesday with the International Monetary Fund to speed up the disbursement of cash from a $50 billion credit line.

Crippling inflation, a historic drought and the world’s highest interest rate are holding back the economy, which is set to enter its second recession in three years. Macri vowed to tighten its budget and focus on bringing the fiscal deficit as close as possible to zero in 2019.

It also follows one of Argentina’s most turbulent weeks in recent memory. The peso fell 16 per cent after Macri made the surprise request last Wednesday to seek payments faster from the IMF. The central bank sold reserves and hiked its key interest rate up to 60 per cent from 45 per cent.

“This is good news because now the bar has been set to achieve fiscal balance in 2019 and a decent surplus in 2020,” said Walter Stoeppelwerth, chief investment officer at Balanz Capital.

Macri’s party “still does not have a spokesman who can generate confidence to the market, and the failure to inject new blood into the economic team is a problem. We are in intensive care and it will remain to be seen how long it will take for the government to regain market confidence.”

Even before last week’s selloff, Argentina was having a rough year. After officials predicted strong growth and lower inflation at the beginning of 2018, a mix of bad luck, vague communication and confusing policies put Argentina on track for a recession after the record drought curbed soy output and inflation crimped consumer demand.

Rising US interest rates in April and an emerging market selloff in August added to the peso’s problems. August was the peso’s worst month since the country’s historic debt crisis in 2001. Officials now see the economy contracting 1 per cent so far this year.

Disjointed communication compounded the peso’s pain. Macri’s request was not confirmed by the IMF for much of Wednesday, until managing director Christine Lagarde said later in the day she would review the stand-by agreement.

Investor concern mounted due to lack of detail about both Macri’s request and the government’s plans to cut its fiscal deficit.

Macri is in a pinch to please investors by cutting spending, while ensuring that the belt-tightening of austerity doesn’t cause social upheaval ahead of next year’s election.

Prices may stabilise at these battered levels, but the electoral impact of this adjustment will be strong,” said Alejo Costa, BTG Pactual Argentina’s chief strategist. “The government tried to contain the political impact with the export taxes, but either way activity will remain depressed.” – Bloomberg