Randox hopes to benefit from Christmas cheer in Donegal 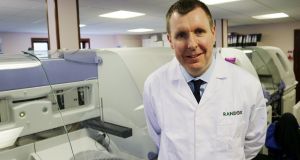 Dr Ciaran Richardson, head of research and development at Randox Teoranta. “There are fantastic career opportunities here in one of the most beautiful parts of the world – and the quality of life is second-to-none,” he says.

One of the North’s top companies plans to host a special Christmas jobs fair targeted at people who are on a festive trip back home.

Randox Teoranta, part of the Antrim-headquartered healthcare diagnostics group, is going to throw open the doors of its plant at Meenmore in Dungloe on Christmas Eve for the first time in a bid to showcase to returning visitors what they could be missing out and host a special Christmas recruitment fair.

Randox, which in March 2018 had 120 full-time staff in Meenmore, wants to grow its workforce there to 540 people by 2020 and Dr Ciaran Richardson, head of research and development at Randox Teoranta, said the company is offering “world-class career opportunities in the heart of Donegal”.

“Our scientists are working on a range of research projects which will lead to quicker diagnoses of conditions such as stroke, gastrointestinal disorders and chronic kidney disease. In 2016, our scientists even developed a pioneering new test to determine a patient’s risk of developing Alzheimer’s disease,” he added.

Dr Richardson said there are also a wide range of other jobs available at its Dungloe plant including software, engineering and manufacturing positions.

“There are fantastic career opportunities here in one of the most beautiful parts of the world – and the quality of life is second-to-none,” he said.

The Randox group was founded in 1982 by managing director Dr Peter Fitzgerald and has grown to become a global organisation which operates in 145 countries.

Dungloe is one of the group’s key manufacturing and research and development sites. Others are located in Antrim; Bangalore in India and another is in development in the greater Washington DC area.

Randox employs 1,400 people, with a majority of those based in Ireland. It has 44 nationalities among its workforce and Dr Fitzgerald has previously said that following the UK Brexit vote Randox “reassured” all of its workforce that it was “committed to developing them and furthering their careers”.

He has warned however in the past that if Brexit were to result in “negative elements” in the UK or “restrictions on bringing more talent into the country” then it could lead Randox to consider expanding further in Donegal.