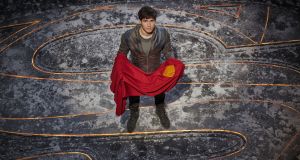 Krypton: One of the biggest productions to use the studio complex

Belfast Harbour wants to develop six new film and television studios as part of a £45 million (€54 million) investment project, which it believes has the potential to support 1,000 creative industry jobs in the North.

The harbour has applied for planning permission for the development, which would quadruple the size of the existing Belfast Harbour Film Studio site and position it to become the largest studio complex in the UK outside the south east of England.

“In recent years Belfast has established itself as one of the UK’s top media production hubs. In 2017 we invested £20 million to provide brand new studio facilities, but with record levels of demand for studio space globally, we are confident the time is right to progress with phase two of the development.”

Phase one of the Belfast Harbour Studio development, based at Giant’s Park on the outskirts of the city, includes two 32,000sq ft studios and 125,000sq ft of overall production space.

One of the biggest productions to use the studio complex was SyFy’s TV series Krypton, and according to harbour executives it is currently contracted to another major film production company.

Belfast Harbour holds “trust port” status, which means it reinvests its net earnings after tax. It plans to develop a further four 21,000sq ft studios, two 16,000sq ft studios and up to 100,000sq ft of production offices and 130,000sq ft of support workshops on a 20-acre site beside the existing complex.

If the harbour secures planning permission, it intends to start construction of the second phase later this year and have it open for business by 2021.