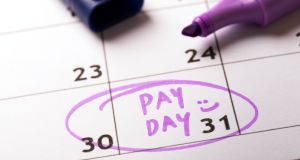 The average full-time salary in the Republic is now nearly €49,000, according to the Central Statistics Office (CSO).

The CSO’s latest earnings figures show wage growth in the Irish economy picked up again last year, accelerating to 3.6 per cent, the fastest rate recorded since the 2008 financial crisis. However, the onset of coronavirus and the sharp rise in unemployment this year is expected to halt this trend.

The figures show that to the end of last year earnings continued to recover since the previous downturn, rising by nearly 12 per cent since 2014.

Annual earnings rose in all 13 economic sectors surveyed by the CSO in 2019. The largest percentage increase of 8.3 per cent was recorded in the administrative and support services sector, where average annual earnings rose from €29,623 to €32,071.

This was followed by an increase of 5 per cent from €61,269 to €64,345 in the information and communication sector. IT workers are the best paid staff in the State, earning 50-60 per cent more than the average.

The accommodation and food services sector, which covers most of the hospitality sector, had average annual total earnings of €19,153 in 2019, up 4.9 per cent on the previous year, but was the lowest of all the sectors.

Average annual earnings in the construction sector rose 2.8 per cent to €41,686.

The figures show earnings vary widely across the Irish economy, with the highest averages in information and communication sector (€64,345) and financial, insurance and real estate sector at €60,409.

Separate CSO figures this week show more than 400,000 jobs were created in the Irish economy between 2014 and the first part of 2020, before the Covid-19 crisis hit and reversed the trend.

The rapid growth in employment coincided with an equally rapid drop in unemployment, which had, up until the current crisis, put upward pressure on wages generally. When employers chase a shrinking pool of labour, wages get bid up.