Dear prudence, Thunberg vs Trump and patience is a virtue 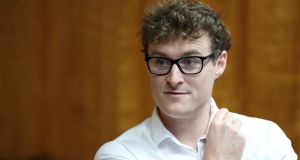 The pensions reform issue has caught Fine Gael off guard and auction politics is taking off. Ciarán Hancock meets Minister for Finance Paschal Donohoe and finds out what he thinks of the pressing issues, from the housing crisis to climate change.

Ryanair wants the Irish courts to bar price comparison website Skyscanner from selling its flights with what the airline alleges are hidden charges. Barry O’Halloran reports.

Joe Brennan has been toiling in Davos all week. In Agenda he tells us that it was a place where two worlds collided: one inhabited by Greta Thunberg and the other by Donald Trump.

In World of Work Olive Keogh hears that patience is a much underrated virtue in the world of business.

Ken Sharp, who owns the Boat House restaurant and Salty Dog hotel and restaurant in Bangor, Co Down, on how Brexit proof his business is.

In Caveat Mark Paul finds Web Summit founder Paddy Cosgrave, who was feeling either bored or mischievous, deciding that he would garner some attention for himself by pouring a very personalised form of scorn on the entire Irish journalistic trade, safe in the knowledge that this would prick the navel gazers into a righteous fury.

In his column John FitzGerald warns us that election promises may make the housing crisis worse.

In our weeklyInside Business podcast we cover the dominant issue of the election campaign so far. The growing, ageing population has created a pensions time bomb for this Government and the gap between the common retirement age of 65 and eligibility for the state pension has emerged as a major election issue. Our own Dominic Coyle explains the problem, while Willie O’Dea, Fianna Fáil’s spokesperson on pensions, claims his party will make a better fist of this policy area if voted in next month.

Stay up to date with all our business news: sign up to ourbusiness news alerts and our Business Today daily email news digest.