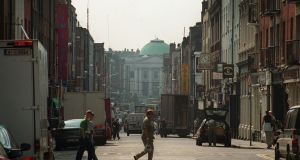 Two new hotels planned for Dublin’s north inner city have been granted planning permission including the first entry by Northern Ireland hotel and entertainment group, Beannchor, into the market in the Republic.

Dublin City Council has approved revised plans by Cathedral Leisure, which is part of the Beannchor group, for a 98-bed bedroom hotel on the site of the former Boland’s bakery off Capel Street.

Beannchor owner, Bill Wolsey, wants to make Dublin the second location for a Bullitt Hotel after it launched the brand in Belfast in 2016.

It is the second attempt by Beannchor, which owns the five-star Merchant Hotel in Belfast, to seek planning permission for a hotel on the site of the former bakery.

The hotel group had its plans for a 62-bedroom hotel on the site rejected by An Bord Pleanála in early 2020 on the basis it was not an adequate design given the opportunity to develop the site.

Cathedral Leisure had originally sought to develop a 96-bedroom hotel on the site but reduced the number of bedrooms and the proposed height of the building from eight to three storeys in the face of considerable third-party objections.

The latest plans, which again reinstate a design for an eight-storey building, could still face an appeal to An Bord Pleanálá.

However, the board signalled last year it did not have concerns about Cathedral Leisure’s original plans in terms of height.

One of the main objectors to the original plans, Creekvale, a rival hotel group, has not opposed the latest design as it has since secured planning permission for a 273-bedroom hotel on a nearby site off Capel Street between Arran Street East and Little Mary Street.

Dublin City Council has also approved plans for a 94-bedroom hotel by Vision Wave, a company owned by hotelier, Brian McGettigan, on the site of a number of existing buildings between Capel Street and Parnell Street.

The seven-storey development also provides for a whiskey lounge, wine cellar, spa, and restaurant as well as a rooftop private lounge for residents.

Mr McGettigan had his original plans for a 65-bedroom hotel on the site approved by An Bord Pleanála in 2019 following an appeal but later submitted a revised design for a larger development of 121 bedrooms which was rejected by the council in early 2020.

The approval by the council of the two new hotels for the Capel Street area comes shortly after planners cited an overconcentration of hotels in that part of the city as one of the grounds for refusing planning permission for a proposed development of a 142-bedroom hotel by Ringline Investments on the corner of Capel Street and Strand Street Little.

However, the plans by Cathedral Leisure and Vision Wave had been lodged before Ringline’s application.