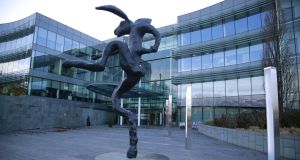 The Serpentine consortium, a syndicate of private individuals and companies assembled by AIB private banking and Goodbody Stockbrokers, has initiated a process to dispose of its interest in Facebook’s new European headquarters in Ballsbridge.

The 30,171sq m (324,766sq ft) four-block complex, which is located to the rear of the social media giant’s Dublin 4 campus, is expected to command a guide price of around € 380 million when it is offered to the market later this year. It is understood the consortium issued a request for proposal (RFP) to several commercial real estate advisers last week, with a view to selecting an agent to handle the process.

The sale of the property is expected to attract significant interest from international investors, notwithstanding the uncertainty caused by the Covid-19 pandemic. The Serpentine consortium’s holding is fully-let to Facebook for a further nine years term-certain and forms part of the wider 79,290sq m (853,475sq ft) campus which is in the process of being delivered on the former AIB Bank Centre site.

Upon completion, the Ballsbridge complex will be capable of accommodating more than 7,000 workers, making it Facebook’s second-largest campus globally, outsized only by its global headquarters at Menlo Park in California. More than 60 Facebook teams will eventually be located in Ballsbridge. It will also be home to staff working for its subsidiary applications, WhatsApp, Instagram and Messenger, and its Oculus virtual reality unit.

The highest-profile element of the Dublin 4 campus will face on to the Merrion Road and is being developed currently by Johnny Ronan’s Ronan Group Real Estate (RGRE). Fibonacci Square, as it will be known, is set to comprise 34,838sq m (375,000sq ft) and has been fully-let to Facebook on a 25-year lease commencing in 2022. The company’s decision in 2018 to take out a 25-year lease on the Fibonacci Square office development represented the largest single office letting in the history of the State.

The middle portion of the Facebook campus meanwhile consists of four office blocks extending to a total of 14,280sq m (153,709sq ft), which remain under the ownership Davy Target Investments.

9 No higher taxes, Hostelworld’s investor and Deka buys another building