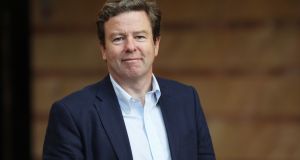 Announcing Mr Williams’ appointment at RGRE, Johnny Ronan said: “Rory brings an exceptional legal mind and a wealth of knowledge and expertise to the role having served in senior leadership positions in both the private and semi-State sectors. He will be a fantastic addition to our leadership team.”

RGRE has a development pipeline in excess of seven million square feet in Dublin at present. The company is currently on site on three major city centre projects including Tara Street which, upon completion, will be Dublin’s tallest building; Salesforce Tower at Spencer Place; and Fibonacci Square in Ballsbridge which will be home to Facebook’s new EMEA headquarters. To date, the Ronan Group has developed 10 million sq ft and master planned 30 million sq ft of buildings in Ireland, UK, Russia and China.

Commenting on his appointment as ceo of RGRE, Mr Williams said: “I look forward to working with the Ronan Group team to build on this powerful momentum and to strengthening our pipeline further with the highest quality developments.”

Separately, John Savage, a senior asset manager since joining the company in 2016, has been appointed interim chief operating officer.

1 How can I view my dead brother’s will if I’m not the executor?
2 Investors pile into property as turnover in build-to-rent sector reaches €2.54bn
3 Provisional liquidator appointed to Dublin engineering firm
4 Bursting of Tesla bubble a case of ‘not if, but when’
5 Kerry’s Chinese sales set for 30% hit from coronavirus
6 Apple’s coronavirus sales warning hits global markets
7 Walmart disappoints with weak sales volumes over Christmas
8 Bank of Ireland staff in line for 2.95% pay increase
9 Finance Ireland plans stock market flotation in May
10 Must you pay a price for ethical investment?
Real news has value SUBSCRIBE