Galway land with planning for 61 houses guiding at €3.75m 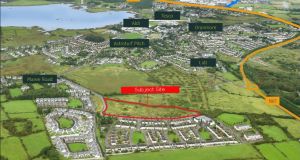 An aerial view of the subject site in Oranmore, Co Galway

Agent Cushman & Wakefield is seeking bids in excess of €3.75 million for a 2.66 hectare (6.57 acre) site with full planning permission for 61 homes in Oranmore, Co Galway.

Located just 9km from Galway city, the subject site is being offered for sale by way of a licence agreement or an outright purchase by the Nama-appointed receiver, Duff & Phelps.

Under the terms of such licence agreements, a developer is given the right to develop a site in accordance with its planning permission following the payment of an initial deposit. The successful bidder is selected on the basis of a published weighting system that places emphasis on price, track record of building similar projects and the ability to construct.

Located within the established Oranhill area of Oranmore, the proposed scheme of 61 new homes will comprise a mix of house types that will be in keeping with the existing character of the area.

Oranmore is 9km east of Galway city and has the benefit of ready access to both the M6 and M18 motorways, and a range of commuter rail and bus services. The town itself offers a range of amenities including supermarkets, restaurants; banks and a variety of ancillary services.

Patricia Staunton of Cushman & Wakefield’s Galway office says: “Oranmore is now rightly seen as a suburb of Galway city and the lands offer an opportunity to capture the demand for good quality family homes in this location.”