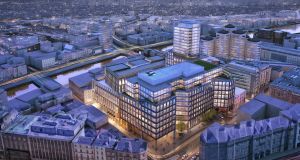 An artist’s impression of the College Square scheme. The apartments will be located in the tower at the right.

Developer Pat Crean’s Marlet Property Group has secured planning permission from Dublin City Council to increase the height of the 11-storey office block it is delivering on the site of the former Apollo House to 21 storeys.

The approval of Marlet’s application clears the way for the company to add a 10-storey tower comprising 54 build-to-rent apartments to the top of the office scheme for which it had received permission previously.

The apartments will comprise 45 one-bedroom and nine two-bedroom units, and will be complemented by 207.9sq m (2,237sq ft) of internal communal amenity space, as well as external terrace areas. The combined height of the amended College Square development will rise to 78.95m (262ft) above street level.

The decision to approve the taller scheme is in keeping with Minister for Housing Eoghan Murphy’s Urban Development and Building Height guidelines which aim is to make more efficient use of land in the city and lessen the impact of urban sprawl.

And while it won’t have any bearing on the fast-track planning application submitted by developer Sean Mulryan’s Ballymore Group to Bord Pleanála for a 23-storey apartment block next to Connolly Station in Dublin 1, the approval of Marlet’s application may well set a precedent for higher-rise office and residential schemes in the city centre.

Ballymore, for its part, is seeking permission for the construction of 741 build-to-rent apartments distributed across eight blocks ranging in height from four storeys (39.6m) to 23 storeys (79.45m). The apartments proposed for the Connolly Quarter development comprise a mix of studios and one-, two- and three-bedroom units.

A proposal for the development on the site of two office buildings, and a hotel is set to be the subject of a separate planning application to Dublin City Council later.

Elsewhere in the Dublin Docklands, Johnny Ronan’s Ronan Group Real Estate is engaged in pre-planning discussions with Dublin City Council with the aim of increasing the number of apartments on its 4.6-acre Project Waterfront site from 420 to 1,000 units distributed across two towers rising in height to 44 and 40 storeys respectively.

At 155m the taller of these blocks would be more than three times the height of Liberty Hall (51m), and nearly twice the height of the 88m (23-storey) office and hotel tower on Tara Street for which Ronan secured planning permission earlier this year.