Farmers gather at Dáil to protest at Mercosur trade deal

Over one thousand farmers have gathered at Leinster House in protest against rural Ireland austerity and the Mercosur trade deal, which is seen by many producers as the “final nail in the coffin” of the Irish beef sector. Video: Ellen O'Riordan 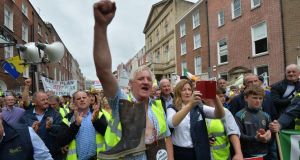 Jarlath Farrell from Tuam, Co Galway at the farmers’ protest outside the Dáil. Photograph: Alan Betson

Over a thousand farmers gathered at Leinster House on Wednesday in protest against rural Ireland austerity and the Mercosur trade deal, which is seen by many producers as the “final nail in the coffin” of the Irish beef sector.

Many farmers said they would not take the deal lying down, warning that politicians who don’t listen will pay the price at the next general election.

The Beef Plan Movement, the farmers’ voluntary group behind the event, instructed protesters to bring wellies to leave behind outside the Dáil, to symbolise the death knell of their industry.

A trade agreement between the EU and the Mercosur countries of Brazil, Argentina, Paraguay and Uruguay, which was 20 years in the making, will see 99,000 tonnes of South American beef allowed into the European market each year.

Beef Plan’s vice chairman, Hugh Doyle, railed against the hypocrisy of the European Union, in which bovine-meat- already attacked for its high emissions- will be flown across continents and with fears the deal will lead to increased deforestation in the Rainforest.

Referencing the environmental broadcaster David Attenborough, he asked how a deal could be struck where money trumped the environment. Mr Doyle said the Government should be “harnessing” what agriculture can do for the environment, and farmers would welcome advancements like methane-to-fuel conversion.

Speaking to The Irish Times, he said the beef industry was being used as a “sacrificial lamb” and the Government should be up-front about this.

“We are very angry because decisions are being taken without our input. At the end of the day, we have nothing to lose here because our industry is as good as dead.”

While retailers and processors have raked in handsome profits, beef producers have suffered years of squeezed profit margins, Mr Doyle said. If farmers cannot make ends meet, rural parts of the country will be hollowed into extinction, he added.

“This is not necessarily a Beef Plan protest, this is rural Ireland standing up for itself,” he said.

“We have been talking about rural broadband for the last four or five years. It’s now 2019 and it still hasn’t happened. We feel what we get from the government is all talk. It is political hype with nothing behind it,” he added.

President of the Irish Cattle and Sheep Farmers’ Association, Edmond Phelan (62) can trace his farming roots back to the 18th century. The Waterford beef farmer said the industry was “on its knees” long before the recent trade deal, as beef producers are in a financial “stranglehold” by the processors and retailers.

“The prices have been boiled down into loss-making territory. Brexit and Mercosur are just the final nails in the coffin of the beef industry,” he said.

Farmers’ anger is directed at the Irish government, more so than Brussels, he said, adding: “Ireland doesn’t stop outside the M50. There are 100,000 farmers and their families who all vote.”

Mr Phelan added: “We are not going to lie down and be walked on. We are telling politicians to stand up or stand down.”

The Beef Plan Movement protest comes hot on the heels of a lobbying event by the Irish Farmers’ Association. Representatives from the IFA met with TDs on Tuesday and are in Brussels today to relay concerns. The two groups are in no way affiliated, and a founding member of Beef Plan, Michael McNally (60) said the movement arose because the industry’s largest union, the IFA, has been failing farmers for the last two decades.

Taoiseach Leo Varadkar confirmed on Tuesday his intentions to nominate EU agriculture commissioner Phil Hogan- who has faced criticism in the wake of the Mercosur deal- for a second term in Brussels. While Mr Hogan has said in the past he understands the concerns of Irish beef farmers, he also said that concessions had to be made and that gains would be felt in other sectors, such as dairy farming.

Beef Plan’s Michael McNally said the group have advised the government against the appointment, which is perceived as politicians giving “two fingers to the beef farmers.”

“The Government does not have the mandate to sell out rural Ireland,” said the 6th generation Co Meath beef farmer.

He warned that farmers attending the protest today will use their vote to effect change. “We are going to organise and get ready for the next general election. We will not return people to power who do not listen.”

“Rural Ireland is the very fabric of our society and our present government acts as if our lovely green country ends at the M50. Farmers feel lonely and deserted. It’s as if they don’t matter anymore. At the moment Fine Gael is not listening and that is a very sad thing.”