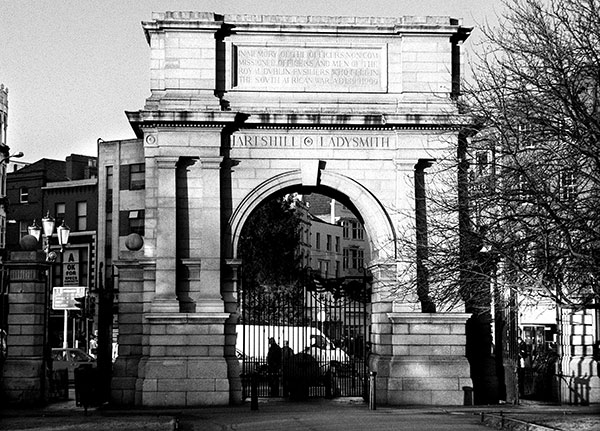 Members of the Irish Citizen Army under the command of Major Michael Mallin occupied the green, one of the first areas occupied. As the week wore on the strength of the garrison rose to about 140 men and women. When it was taken, Constable Michael Lahiff, of the College Street Dublin Metropolitan Police station, was on duty; he was shot for “refusing to leave his post”. It is often said that Countess Markievicz – Mallin’s deputy – shot Lahiff. No fewer than 11 streets led into the green. This was both a boon and a bane for the garrison as it provided a key position for the Citizen Army but also gave the British several access routes. The green was abandoned on Tuesday when it came under machine-gun fire from British forces. Mallin and Markievicz withdrew to the Royal College of Surgeons in Ireland. They surrendered on Sunday, April 30th. The College of Surgeons suffered little structural damage, although the pockmarked columns are evidence of the bullets that hit them.