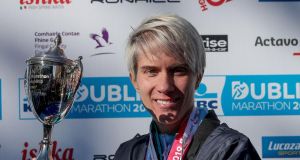 Aoife Cooke ran the fastest marathon by an Irish woman on home soil in the 2019 Dublin marathon. Photograph: Bryan Keane/Inpho

Not many people had heard of Aoife Cooke before the Dublin Marathon last October. For some she was last heard of 15 years ago, as a junior in Cork, before dropping off the running radar completely.

So it appeared Cooke came out of nowhere to finish as first Irish woman, the Dublin Marathon doubling as the national championship, and better still in a time of 2:32:34 – the fastest marathon ever run by an Irish woman on home soil.

It was a surprise but also carefully planned breakthrough, Cooke overtaking Anne Marie McGlynn in the closing stages to hold on for the win by 20 seconds, her time also jumping her from 55th to 5th on the all-time Irish women’s marathon list. Suddenly there was talk of the Tokyo Olympics, and three months after Dublin she’s very much keeping that dream alive.

At age 33, Cooke is far from old by women’s marathon running standards. Still, Dublin was her first national medal since her younger days, the standout achievement being her third place finish in the Irish Junior Cross Country in 2005, which also earned her a first international at the European Junior Cross Country in Tilburg, the Netherlands.

On the back of that she secured a running scholarship at Arkansas Tech, a division two college, where things first began to go wrong, as she struggled with osteopenia, low density in the bones, due to the hard training and insufficient diet. So she left after three years, finished her education at University College Cork, and took time out from serious training to allow her body to heal and recover.

Around six years ago she decided to give her running another go, purely on the enjoyment she gets out of competing. Joining the Eagle athletics club in Cork, she first ran a marathon in Cork in 2015, clocking just over three hours, then in 2017 ran 2:46:37 in Amsterdam – a big improvement, though still shy of international level.

Improving by 14 minutes in Dublin took her to another level, and in any other year would be well inside the Olympic qualifying time. Only for Tokyo, the marathon qualification has been brought into line with the other track and field events, and the automatic qualifying time is 2:29:30. Only 4 four Irish women have ever surpassed this mark, the most recent Fionnuala McCormack, when she clocked 2:26:47 in Chicago last October to secure her ticket Tokyo.

There is another route to Tokyo, Stephen Scullion’s fifth place in Sunday’s Houston Marathon earning him his ticket, as top-five finishes in Gold Label races also qualify.

There have been a lot of breakthrough times in the marathon recently, and there is little doubt this is partly the result of the technological advances in running shoes, led by the Nike Vaporfly Next% – similar technology is being adapted across the various shoe brands. With the carbon fibre plate and zoom foam within the shoe, athletes are experiencing a boost in their running efficiency, resulting in faster times and also more confidence, motivation and drive.

This doesn’t take away from the training required to compete, but in order to keep up and not miss this blanket wave of improvement athletes are left with no choice but to strap on the technologically advanced shoes and move with the times.

It certainly doesn’t take away from Cooke’s improvement either, her motivation to improve coming from within. Once back running in 2018, she felt that her training and racing had stagnated. Athletes often find this happens after a period of improvement and doing the same training week in, week out; maybe even settling into a comfort zone. She needed a change of direction, so came across her current coach, Tralee-based John Starrett, on the Strava social media platform where athletes can record, track and share their daily training.

I also got in contact with her via Strava, tracking her training and discovering she is now on a six-week training camp in Kenya, based in Iten at over 2,000m in altitude, to help maximise her chances of qualifying for Tokyo.

Kenyan athletics has had some serious issues with anti-doping lately, but there is no doubt that Iten is a perfect place to train. Starrett – or coach Stazza as he is known to his athletes – has a training base there, where any level of athlete can stay in comfortable accommodation, full board, at €25 per day. It’s the perfect package for an aspiring Olympic marathoner or any runner that wants to try out the life of a full-time athlete.

Being so remote, Iten also promotes rest and recovery as a key to improved performance. Outside of training, eating and sleeping, there is very little to do so you might as well lie down with a book and let those red blood cells multiply in the oxygen-deprived air.

It takes a committed person to head to Kenya a week before Christmas, get acclimatised and be ready to train when her training partner Garrett Kelly from Wicklow and her coach arrive a week later. It also means stepping well out of the comfort zone, knowing it just might lead to an even greater leap to another level of competing.

It’s also easy to become complacent with achievement, and as much as her time and result in Dublin stood out locally, on the world stage it’s still just knocking on the door with still more room for improvement. Cooke also still works part-time as a personal trainer, and this year decided to prioritise her running, to have greater flexibility and recovery between sessions.

It’s difficult to tell while training at altitude what makes the greatest difference; the change in environment and pure focus on training, or the lower oxygen levels which makes normal daily activities and breathing that bit more difficult.

The first test of all that for Cooke will come at the John Treacy 10-mile race in Waterford on February 2nd, before a more specific training block ahead of the Vienna Marathon on April 19th.

In an Olympic year it’s the dream pursuit and Cooke is doing her very best to get there. The possibilities are endless when motivation and desire propels an athlete to step outside their comfort zone and push the limits.