Ireland finish under-21 campaign with defeat in Germany 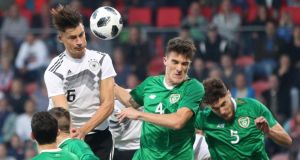 Noel King heaped praise on his Ireland Under-21 players on Tuesday night after they finished their European Championship campaign in third spot following defeat to pool victors Germany in Heidenheim.

After a lively Irish start, sparked by League of Ireland gems Ronan Hale and Jamie McGrath on their first starts, Germany struck the bar on the half hour through Huddersfield Town’s Abdelhamid Sabiri.

That signalled the pattern of the game as the home side forged ahead from their next move.

Ireland responded well and almost equalised as Jordan Shipley’s left-sided set-piece almost found Ryan Sweeney only for Felix Uduokhai to nip in ahead and clear.

It was 2-0 six minutes before the break thanks to a moment of brilliance from Levin Oztunali. After patient build-up play, the FSV Mainz attacker turned onto his left-foot just outside the area and found the top corner.

Ireland were much improved immediately after the break and almost got back into the game 10 minutes into the second half. Danny Kane did well to win a left-sided corner and Shipley’s back-post delivery was headed narrowly wide by Corey Whelan.

And Ryan Delaney came within inches of a consolation in the final minute when he toe-poked a low shot against the post.

“This Germany side were the best I’ve come up against in my eight years in charge,” insisted King afterwards. “Our lads defended well and nearly hit them on the counter.

“It was really encouraging performance for the future, as all but one of these players are now overage and try break into the seniors.”