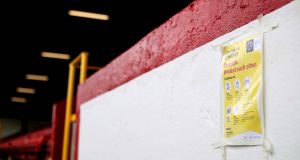 A view of Covid-19 signage at Tolka Park ahead of Waterford’s win over Shelbourne last Saturday. Photo: Tommy Dickson/Inpho

Waterford FC’s League of Ireland fixture against Cork City on Saturday will go ahead after the FAI permitted them to resume training following two suspected Covid-19 cases.

John Sheridan’s side were preparing to travel for a game against Sligo Rovers on Tuesday when a player reported coronvirus-like symptoms, prompting the FAI to postpone the fixture pending the results of his test.

The player had been part of the squad for Saturday’s clash with Shelbourne but didn’t feature in the 1-0 win.

On Tuesday, a second player, who didn’t travel on the team bus to Dublin at the weekend, was sent for testing after feeling unwell.

Later that day, Sinéad Fitzpatrick resigned after five years as the club’s doctor.

As per safety protocols, the club had ceased all activities since Monday, including training sessions for their underage squads.

Thankfully, the first player’s test proved negative on Wednesday. And, while with the second player’s result is yet to come, his status as a “casual contact” to the squad facilitates a return to play.

The news enables Sheridan and his team to resume training at the RSC ahead of Saturday’s Munster derby.

City, while top of the FAI’s table for streaming subscriptions, remain rooted to the bottom of the real version after six games.

Their first match following the restart on Sunday ended in a 1-0 home defeat to Bohemians.

Waterford, meanwhile, sit in fifth. Alan Reynolds had overseen two wins and two defeats before the lockdown and his successor, Sheridan, marked the start of his reign by shocking Shels last Saturday.

Meanwhile, Uefa have confirmed that they are exploring the possibility of staging some of the September internationals at neutral venues.

Stephen Kenny’s first game as Ireland manager in Sofia on September 3rd is in the spotlight as opponents Bulgaria remains one of the worst-hit countries in Europe for coronavirus.

FAI chief executive Gary Owens indicated on Wednesday the likelihood of a change of venue, either to a neutral country or switching the fixture to Dublin. Ireland are due to the conclude their Uefa Nations League campaign at home to Bulgaria on November 18th.

A statement from Uefa following their conference call with all 55 members, including the FAI, said: “The September international window was also discussed and the difficulties that the national teams will have to face with the same restrictions highlighted. Close cooperation between all teams and Uefa will be needed to ensure the regular staging of all matches.

“The possibility of playing international matches at neutral venues cannot be discounted at this stage.

League of Ireland clubs, too, will have to reroute should any of the four participants be given away ties in the draws held on Sunday and Monday.

“In order to comply with travel restrictions and quarantine requirements issued by authorities, some matches may need to be moved to neutral countries/stadia and the detailed scenarios were presented,” Uefa added.

“In this respect, Uefa thanks four associations for their cooperation (Poland, Hungary, Greece and Cyprus), which means that it has been able to provide neutral venue hubs, with these countries making some of their stadiums available on the scheduled match dates and offering a travelling corridor to the teams to come and play the match without restrictions.”

A decision on whether to admit at least partial attendances into club and international matches is still a few weeks away.

“Both Uefa and national associations are aware of the importance of allowing fans back into stadia but the situation in Europe is very fragmented.

“Uefa is constantly monitoring the evolution of the regulatory landscape in the different countries and a review of the situation is planned around mid-August to see if the current decision of playing all matches behind closed doors can be at least partially changed.”