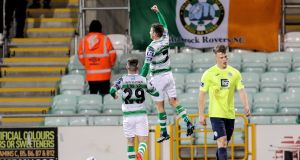 After performances against Dundalk and St Patrick’s Athletic recently that suggested Finn Harps would be nobody’s pushovers this year, Shamrock Rovers barely had to apply enough pressure to break into a sweat here as they secured a win big enough to send them above cross-city rivals Bohemians at the top of the table.

The talk these past few weeks has been of Stephen Bradley’s side containing enough midfield talent to create an ocean of goals; the accompanying question being whether they had s striker to actually score them. Aaron Greene’s second of the season will have eased concerns a little on that front while the ones from Roberto Lopes and Dylan Watts might leave fans wondering whether Stephen Bradley has hit upon a formula that bypasses the need for a new Gary Twigg.

The visitors had their moments but they were few and generally very far between. It seems an unlikely charge to level at an Ollie Horgan side from Donegal but ultimately they didn’t really look to be up for a chilly evening in Tallaght, at least until they found themselves staring down the barrel of a humiliation.

They certainly contributed a good deal to their own downfall. Poor defensive play that extended to almost every midfielder allowed Rovers to repeatedly open the back four up through the first half and it seemed remarkable really that it was only 3-0 at the break. The best of the home side’s ball players, Watts and Jack Byrne, had something of a field day as they picked out one pass after another for team-mates to run onto. Aaron McEneff went close twice while also earning his side a penalty.

Watts missed that but made amends with a lovely finish on the half-hour after Dan Carr capitalised on the sort of defensive error by Harry Ascroft that must give a man like Horgan nightmares. Lopes got himself a tap in and Greene finished well after running on to a perfectly weighted Seán Kavanagh ball down the left and between two defenders.

It looked to have the potential to get a lot worse for the visitors but, to their credit, they had enough about them to make life a little bit harder for Rovers after the break and even managed to create a couple of chances themselves.

Greene still should have made it four after great work by Carr but instead clattered the underside of the bar and was left claiming the goal even as the ball bounced back out past him.

Peter Burke then gave the small band of Harps fans off to his left a bit of a scare by badly miscontrolling a harmless Brandon Kavanagh effort but Harps held on to what they had, which was primarily a bit of pride.

Despite the positive result and first-half performance, the home support could have been forgiven for feeling their side had eased up a little too much after the break when there looked to be more goals to be had.

Instead, the most they had to cheer about through the latter part of the cold evening was the by now traditional sending of Horgan to the stand by the referee. The Harps boss appeared, from a distance, to have done little more than allow Ascroft to linger on the edge of his technical area after the Australian’s debut had been brought to an early end.

The pair were deep in conversation, reflecting, it seemed, on the pros and cons of the player’s performance when Ben Connolly arrived to order Horgan off. It was a soft one by the manager’s standards but it was that sort of night.

Bray Wanderers, Shelbourne, Cabinteely and Galway United progressed to the second round of the EA Sports Cup on Monday night.

Bray’s bright start to the season continued as three first-half goals sealed a 3-2 victory over Wexford.

A second-half penalty by Luke Clucas clinched a 1-0 win for Cabinteely at Drogheda United while Daniel McKenna grabbed the only goal as Shelbourne prevailed against Leinster Senior League side Bluebell United.