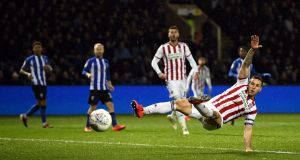 Billy Sharp of Sheffield United stretches for a cross during the Championship match against Sheffield Wednesday at Hillsborough. Photograph: Stu Forster/Getty Images

Sheffield United lost ground in the Championship promotion race as they were held to a goalless draw by Sheffield Wednesday in the Steel City derby at Hillsborough.

After wins on Saturday for leaders Norwich and second-placed Leeds, the Blades missed the chance to return to the top two – although Wednesday were good value for a point.

The home side came into the contest on the back of a seven-match unbeaten run in the league which had banished talk of a relegation battle and set-up a possible late run at a playoff place.

United have not lost any of their last seven league games – and have not conceded for four consecutive matches – but struggled to fashion chances against a resilient Owls side.

The opening stages were overshadowed by United’s Jack O’Connell having objects thrown at him from the crowd while taking a throw-in.

The visitors carved out the only meaningful chance of a drab first half when Oliver Norwood’s cross found Gary Madine at the back post, only for former Ireland goalkeeper Keiren Westwood to deny the former Wednesday striker with a smart save.

Madine felt he should have had a penalty after tangling with Michael Hector at a corner after 15 minutes, but both teams lacked quality in the final third as the contest became increasingly scrappy.

Wednesday’s lack of cutting edge prompted manager Steve Bruce to bring on George Boyd for Fernando Forestieri at half-time and it almost worked immediately as Steven Fletcher sent an overhead kick over the bar from the former Hull forward’s 46th-minute cross.

The hosts began to enjoy a sustained spell of pressure and Rolando Aarons almost put them ahead after 59 minutes when he beat his man and struck a fierce left-foot effort that Dean Henderson did well to parry away.

Wednesday should have gone ahead in the 65th minute when Aarons’s brilliant cross from the left was met by an unmarked Sam Hutchinson eight yards out, but the midfielder shot straight at Henderson.

Liam Palmer tried his luck form 35 yards, while at the other end nobody was on hand to meet substitute David McGoldrick’s ball across the six-yard box after he was well picked out by Norwood.

The Blades finished the stronger side, with a string of Norwood set-pieces causing panic in the Wednesday backline without a clear chance emerging.