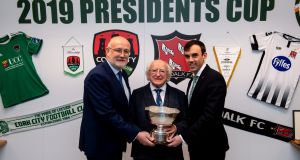 League of Ireland director Fran Gavin has met with Niall Quinn and hasn’t dismissed the possibility of the former international’s proposals forming part of a new domestic structure from 2020.

That juncture is when the Football Association of Ireland plan to cede control of the League to a hybrid model, with a view to gradually affording the clubs full responsibility for running their own affairs.

Quinn, through a combination of private investors and government support, wants to lead the overhaul of a league that has, at the very best, stagnated since the FAI took over the negotiation of commercial and broadcasting agreements.

A failure to grow the overall attendance base in any meaningful manner, the extinction of some clubs and salary issues at others, allied to a slip in the League’s Uefa coefficient to 37th of 55 nations, all signify a change of guard is overdue.

Gavin isn’t averse to Quinn, the former Sunderland chairman, being involved in the transition.

“I actually met Niall a few weeks ago after hearing one of his interviews on the radio,” explained Gavin ahead of Saturday’s traditional season curtain-raiser, the President’s Cup final.

“I know Niall a long time, he’s a football guy, but from some of the stuff I heard I don’t think he was fully informed. It gave an impression that that we don’t do anything with the government around facilities.

“We’re always open to meet anyone who wants to improve Irish football. When he puts more meat on the bone, then we’ll meet again.”

That chimes with Quinn’s declaration. His project, whereby all 20 clubs receive at least €2 million each to initiate an academy system, has been encouraged by a cohort of politicians in principle.

His vow to develop the concept into a blueprint within six months correlates with the FAI annual general meeting, the point by which Gavin wants a definitive answer from clubs on their desired route.

Soundings from the five club representatives (three Premier Division, two First Division) on the nine-person steering committee indicate the third-party company option is the only show in town.

The process of the Premier Clubs Alliance (PCA) discovering the exact monies received by the FAI for League of Ireland commercial deals is complete, according to Gavin . Senior counsel Michael Cush was nominated by the clubs to examine the books.

“We’ve taken on Deloitte to put the structure of the company together – both parties have met together with Deloitte – and in our last meeting we went through that.

“They [the clubs] have to meet themselves now, to see how they want to structure the company internally, as regards things like weighted voting or equal voting, before they come back to us. That’s where we are.

“It’s something the clubs have wanted for the last while, more control, and that comes with responsibility. It is quite a sizable task to move from running a club to collectively coming together and running a league itself.

“Clubs need to have those discussions among themselves, hopefully a united front. Are they united? Only they can answer that one. However, we don’t want a vacuum, we need certainty.”

All 20 clubs were issued with licences for the season on Friday. Gavin appeared confident of avoiding the pay issues which plagued Limerick and Bray Wanderers last season.

“It’s my 13th in this role and there’s no guarantee on anything because I don’t run the businesses or sign the players,” he confessed.

“Limerick need support, and they have got some during the off-season, but if they going to get back into the Premier and compete at the top level, they’ll require further investment.”

1 Aviva 10-year ticket holders seek clarity over payment
2 Gerry Thornley: Home and away Six Nations could be its ruination
3 Eddie Dunbar stays in the saddle as he eyes a return to the grand stage
4 Darcy says enforced break could end up being a positive for Dublin
5 Coming fourth in the Olympics didn’t change this fearless quartet, time did
Real news has value SUBSCRIBE