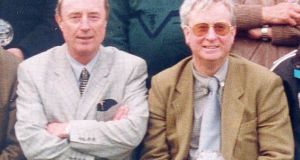 Bohemian Football Club have described their former honorary treasurer Oliver Ward, who was buried on Monday after a funeral mass at Our Lady help of Christians Church on the Navan Road, as an “inspiration” and a man who started to agitate for change at the club long before he joined its management committee in 1987.

Ward, who had been born in Castlepollard in 1942, moved at a fairly early age to Dublin where he much of his working life at what was originally called the Institute for Industrial Research and Standards. His involvement in football included a lengthy spell as a referee in the Leinster Senior League but having been forced by injury to retire from that in 1978, he became involved with Bohemians the following year.

He was at the forefront of the campaign to change the club’s rules so as to allow women to join and his wife Vivienne and daughters Monica and Melanie would all, along with son, Michael, become members in time.

A couple of years after joining the management committee, he was elected as honorary treasurer and is credited with helping to get a new generation of supporters involved in the club. He was also close to Tony O’Connell, the club’s former player who became its president in 1993 and who was the church on Monday for the funeral.

Given the restrictions imposed as a result of the Covid-19 crisis, the numbers present were severely restricted although a number of fans paid tribute as the funeral procession passed Dalymount Park. His family say a celebration of his life will take place at a later date.

TV View: Verstappen full of beans as Red Bull wing their way to stunning success 06:00
All in the Game: Bohemians forced into awkward apology 06:00
My sporting disappointment: Jimmy White and the elusive World Championship 06:00
There’s a bad moon rising but East Belfast GAC shine on 06:00
Ken Early: PSG would be sensible final move for Ronaldo 06:00

1 Ken Early: PSG would be sensible final move for Ronaldo
2 All in the Game: Bohemians forced into awkward apology
3 No final round heroics for Rory McIlroy at US PGA
4 Angling Notes: Mutilated skate baffles experienced anglers
5 My sporting disappointment: Jimmy White and the elusive World Championship
Real news has value SUBSCRIBE