Round-up: Adam Liddle rescues derby point for Derry City; Bohs and Pat’s get off the mark 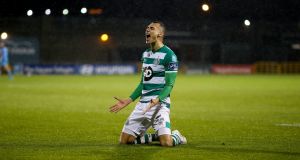 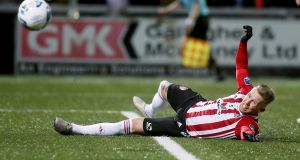 Graham Burke scored five times as Shamrock Rovers eased to victory against a Cork City side that played half the game with 10 men at Tallaght Stadium.

The visitors were already 2-0 down when winger Deshane Dalling, on his full debut, was dismissed in first-half stoppage as Neale Fenn’s new-look Cork slumped to a second successive defeat.

Given the conditions of swirling wind and rain, it was little surprise that a mistake brought the opening goal a dour game desperately required.

There appeared little danger to Jack Byrne’s diagonal delivery from the right on 32 minutes.

Centre half Joseph Olowu scuffed his attempted clearance straight to Rovers striker Burke who picked his spot with a crisp shot to the bottom corner.

Though the lively Dalling drilled a shot wide across goal at the other end minutes later it was all Rovers until half-time.

Burke shot straight at Liam Bossin with Neil Farrugia bringing a superb tip over save from the City goalkeeper on 38 minutes.

Rovers duly doubled their lead four minutes later. Skipper Ronan Finn’s low cross from the right fell for Burke in the six-yard box and he turned to nonchalantly toe poke the ball to the net.

The game was then up for Cork in added time at the end of the half when Dalling was shown a straight red card for a lunging challenge on Roberto Lopes.

It was pretty much one-way traffic from the resumption.

Aaron McEneff worked Bossin with Aaron Greene hooking over the top when Byrne cleverly picked him out in the area.

With Cork sitting very deep it took patience and guile to unlock them for a third time on the hour.

Farrugia and Byrne were initially involved before Burke’s smart backheel to Byrne brought the shot which Bossin couldn’t keep out despite getting a hand to it.

Bossin failed to gather Farrugia’s cross to allow Burke collect the ball at the back post, worked if on to his left foot and drill it to the net for his hat-trick on 74 minutes.

A deflected shot brought Burke’s fourth four minutes later before he completed the rout on 80 minutes with a confident left-foot drive to the bottom corner.

Derry City rescued a point with a 94th minute equaliser at a full to capacity Brandywell to rob Finn Harps of what would have been a deserved victory.

Super sub Adam Liddle, on loan from Reading, marked his debut with that late, late goal when he swept home Walter Figueira’s cut-back to send the home support wild.

Yet despite Derry’s joy, the men from Ballybofey had issued a statement of intent given their overall performance and the predictions that Harps will be involved in a relegation battle may not be so clear-cut.

To be fair, Derry did refuse to give up the ghost but there could be no complaints from Declan Devine.

The defender had taken a throw-in but when the ball was returned to him, his poorly directed pass was picked up by the advancing Connolly who displayed a cool head when curling his left-footed effort home from 14 yards.

Conor Clifford crashed an effort off the Harps crossbar in the 55th minute, and when McDonagh appeared to be pushed by Mark Russell the referee refused to award what would have been a soft penalty.

Bohemians blitzed Waterford with two goals late in the first half at the RSC to record their first victory of the season.

Three minutes before the break, there appeared to be no danger from Kris Twardek’s right-wing cross but Sam Bone at the back post completely misjudged his angles by heading his attempted clearance inside the post.

Bohs’ pressure didn’t relent and Keith Ward’s low shot which struck the inside of the post almost trickled back in off Brian Murphy’s back.

After surviving that scare, Waterford committed further self-destruction on the stroke of half-time as Scott Allardice shoved Danny Mandroiu inside of the box right in front of referee Paul McLaughlin.

Up stepped the victim to send Murphy the wrong way with a rasping penalty down the middle.

Goals from Ronan Hale and Chris Forrester saw 10-man St Patrick’s Athletic pick up their first points of the season as they saw off Sligo Rovers at the Showgrounds.

Stephen O’Donnell’s side hit the lead on 26 minutes when Darragh Noone’s loose pass was pounced upon by Hale who unleashed a stunning drive from 20 yards past Ed McGinty.

The Dubliners doubled their advantage nine minutes from the break as Rovers struggled to find their feet, Forrester picking out the bottom corner on the turn from 10 yards after good work from Robbie Benson and Billy King on the left flank.

The visitors finished the game with10 men when debutant Oliver Younger was shown his second yellow midway through the second period.