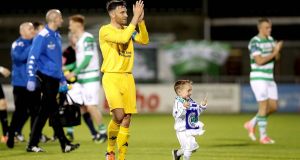 Glenville’s Ciaran McDonnell with his son Senan after their defeat at Shamrock Rovers. Ryan Byrne/Inpho

Shelbourne cruised into the second round of the FAI Senior Cup when inflicting a first home defeat on SSE Airtricity First Division league leaders Waterford FC in their cup clash played in front of a 1,193 attendance at the RSC on Friday night.

After a scoreless opening 45 minutes, it was the Tolka Park outfit who struck the front with just seconds played in the second period and with the Blues missing a 75th minute penalty, they were made to pay the price as goals from Jamie Doyle and James English eased Owen Heary’s side into Monday’s draw.

With Patrick McClean and Sean Heaney going close to opening the scoring for the Blues, it was Shane O’Connor that had the first clear chance on 33 minutes when he took a pass from David McDaid but his effort from the right-side of the area went inches wide.

A foul on Dean O’Halloran out on the left by Shelbourne midfielder Niall Lanigan on 40 minutes gave Paul Keegan the opportunity to send in a dangerous free kick that the visiting keeper Dean Delany brilliantly tipped over the bar.

Shelbourne shocked the home faithful when they struck the front just 26 seconds into the second half when a long ball over the top caught out Waterford defender Kenny Browne and Chris Lyons took full advantage to slip to ball under the body of the advancing Ian McLoughlin.

Referee Anthony Buttimer reduced the visitors to 10 men on 66 minutes when Lanigan, who was booked in the first half for a tackle on Derek Daly, was issued with his second yellow card for simulation when he went down under a challenge from Sean Heaney.

The match official was in the spotlight once again seven minutes later when he judged that Aidan Collins pushed over Mark O’Sullivan in the area and after David McDaid was made to wait to take the spot kick, his effort was saved by Delany.

Waterford were punished for that missed penalty on 78 minutes when Mark Hughes whipped in a corner kick from the left that found the head of Doyle powered a free header past McLoughlin from deep inside the area.

A great night at the office for Shelbourne was summed up by a third goal in the final minute of the tie when Sean Heaney’s attempted headed back to McLoughlin was intercepted by English and he had the simplest of tasks in slipping the ball to the back of an empty net.

Kieran Marty Waters and Ryan Swan scored against their former club UCD to earn Cabinteely their first FAI Cup victory since entering the League of Ireland in 2015.

A nippy finish from for Waters at Stradbrook four minutes before the break gave Cabo a deserved lead and Anto Dolan added a second on 51 minutes with a low drive after Niall Corbett parried Swan’s effort.

Graham Burke’s early goal failed to open the floodgates as Shamrock Rovers, despite owning the ball, laboured into the second round of the FAI Cup against their Leinster Senior League opponents at Tallaght Stadium.

Wasting little time in troubling the visitors, with Glenville keeper Patrick Whelan having to come off his line promptly to smother the ball at the feet of Gary Shaw early on, Rovers took lead on 13 minutes.

Little did they know it would be the only score of the game.

It stemmed from their first corner of the night after which Ronan Finn and Dean Carpenter had initial shots gallanted blocked by the Glenville defence. But the ball ran for Burke who blasted it into the roof of the net off his trusted left foot.

Michael O’Connor chipped wide while Shaw missed a bit of a sitter from Trevor Clarke’s cross as Glenville held out for the remainder of the first half.

The Palmerstown non-league side then blew a chance to level two minutes into the second half. Tomer Chencinski was caught off his line and the retreating Rovers’ keeper had Dean Carpenter to thank for getting back to block Robert Murtagh’s shot.

Though Rovers dominated the remainder of the game, they couldn’t find a further way past an inspired Whelan who made a sublime save from Michael O’Connor, with further stops from Burke and later Finn, as Rovers had to settle for the narrowest of wins.

An 87th minute goal from Jake Donnelly fired Crumlin United into the second round after an absorbing tie in Ferrycarrig Park.

The hosts will be kicking themselves though, with both Aaron Dobbs and Dean Kelly missing second-half penalties before Donnelly’s late winner.

A shock was on the cards when David Vickery fired the Dubliners in front on 25 minutes. Jake Donnelly whipped in a free-kick from the right wing, which fell kindly for Vickery, and he blasted the ball past goalkeeper Danny Bolger.

It only took the hosts four minutes to drag themselves back on level terms, with Owen McCormack getting on the end of Dean Kelly’s teasing free-kick and powering a header beyond Michael Quinn.