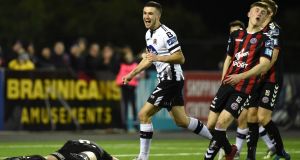 Dundalk set a new league record by starting the season with eight consecutive clean sheets thanks to a 3-0 win over Bohemians at Oriel Park.

After something of a sluggish opening, Stephen Kenny’s side are really motoring now. This was their fourth win in five matches and they enter the second series of games unbeaten and just one point behind rivals Cork City.

The only blemish on an otherwise decent night was an injury to Gary Rogers. The Meathman was looking to equal Alan O’Neill’s club record of eight shutouts in a row but a calf injury meant he was replaced by Gabriel Sava after just nine minutes.

Dundalk carried on regardless and they went in front after 24 minutes when Hungarian midfielder Krisztian Adorjan, making his full League of Ireland debut, was upended by Dan Casey in the box and Patrick Hoban sent Shane Supple the wrong way from the spot.

Bohs hit the woodwork after just 20 seconds of the second half with a long-range Keith Ward effort that looped over Sava only to kiss the top of the crossbar.

Dundalk hit back and a sumptuous Adorjan pass almost set Duffy away on the left in the 53rd minute but Supple was there to collect.

The big goalkeeper then had to throw himself to his right to push the former Liverpool man’s drive around the post five minutes later.

The Gypsies kept going and they had two good penalty shouts waved away by referee Graham Kelly before Chris Shields made a miraculous block to deny Dinny Corcoran in the 89th minute.

The night finished on a high for the hosts as Michael Duffy put the icing on the cake in stoppage time when he collected a Gannon pass to fire home a goal that his performance deserved.

Dan Carr scored the only goal of a dour game at Tallaght Stadium to get Shamrock Rovers back to winning ways.

A fourth straight home win stretches the Hoops’ unbeaten league run in Dublin 24 to nine games as they remain fourth in the Premier Division table.

Though enjoying good early possession, the home side never bothered Micheál Schlingermann in the Sligo goal.

And it was the visitors who registered the first chance of the game 23 minutes in when a loose pass fell into the path of striker Adam Morgan whose drive was deflected for a corner.

Encouraged by that, Sligo grew in confidence as they enjoyed more of the ball in their hosts’ half of the pitch before the break.

David Cawley had a shot deflected off target for Sligo while Shamrock Rovers’ Graham Burke blasted a right-footed shot wide as neither side managed an effort on goal in a desperately poor first half.

Thankfully, the game finally sprung to life on the hour when Shamrock Rovers got their controversial winner.

Despite Sligo pleas for the game to be stopped after Rhys McCabe went down with a facial injury, Hoops played on.

Seán Kavanagh found space on the left flank to whip over a deep cross for Carr to arrive at the back post and stab the ball home for his second goal of the season.

Sligo were further incensed on 83 minutes when Ethan Boyle appeared to handle a shot from Cawley inside the area with nothing given.

A night of woe was completed for Sligo in stoppage time when assistant manager Kevin Derry was sent to the stand for dissent.

Waterford claimed their second away win of the campaign when they won the battle of the Blues in an entertaining game watched by a crowd of 1,122 at the Markets Field.

Limerick have scored only four goals in eight games and on this occasion they had two great chances in the first half but both were superbly saved by Waterford goalkeeper Laurence Vigouroux.

The first real chance in the game fell to Waterford when Gavan Holohan created the chance for Courtney Duffus, whose low shot was stopped by Brendan Clarke.

Neither side created much until the game came alive with a six-minute burst of action. An effort by Duffus took a deflection and was saved by Clarke after 17 minutes. Straight away the action was at the other end when Will Fitzgerald looked certain to score only for Vigouroux’s superb save.

Limerick’s Shane Duggan had a pop from 22 metres after 23 minutes and 60 seconds later the miss became even more painful when the visitors struck.

Poor defending by Limerick conceded possession and Duffus hit a cracker low past Clarke. Just on half-time Limerick had a let-off when Holohan beat Clarke but the ball trickled wide.

The visitors had another chance after 53 minutes but Shaun Kelly cleared on the Limerick line from Holohan.

Waterford substitute Ismahil Akinade was taken down six minutes from the end and Paul Keegan blasted past Clarke to seal the points for the visitors.

Aaron McEneff presented Derry City with the club’s third consecutive victory at the Brandywell, the midfielder’s quality strikes earning him the man of the match accolade.

However, Pat’s will feel particularly hard done by, having had what appeared a good goal disallowed by the referee in the opening period.

The Dublin side had dominated the ball for lengthy periods, but Liam Buckley’s men failed to get the rub of the green and the home side took full advantage in the end, despite having to suffer a particularly nervous finish to the game.

Derry got the breakthrough they craved in the ninth minute and that strike got the home crowd on its feet.

Ronan Curtis carried the ball into the St Pat’s box following a throw-in before finding Rory Hale and his pass to the advancing McEneff fashioned the opening goal.

Without any hesitation, McEneff stepped forward to crash a dipping volley into the net giving goalkeeper Barry Murphy no chance.

However, after the goal, the home side had to weather a heavy storm as Pat’s owned the ball but failed to get the breaks in front of goal.

In the 20th minute Jake Keegan had a superb chance to equalise but he smashed his shot off the upright before the ball was cleared.

And following the resultant corner, Pat’s did force the ball home but referee Rob Harvey controversially disallowed the ‘goal’ due to a foul on goalkeeper Gerard Doherty.

Pat’s huffed and puffed but failed to get the rub of the green in front of goal with Dean Clarke directing a header into the hands of Doherty before the same player failed to control the ball just before the break and another chance was lost.

Content to sit back and hit on the break, Derry where rewarded when they doubled their lead in the 74th minute.

McEneff raced forward and when he sent Rory Patterson scampering clear on the right, the striker returned the ball inside and, as was the case with his first strike, McEneff drove a right foot shot high into the net for another superb finish.

Pat’s gained a lifeline in the 80th minute when Clarke finished well from close range after Doherty had spilled a shot from Jamie Lennon to secure a nervous finish for the home lot.

Battle as they did, Clarke could have equalised three minutes from the end, but he failed to get enough power into close range header.

However, with the last kick of the game, Derry centre back Darren Cole earned his wages when he whipped the ball off his goal-line to guarantee the victory.