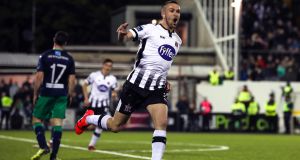 The league’s early pacesetters lost another chunk of their lead in Oriel Park where Dundalk reminded their rivals just why they are champions as they signalled their determination to hang on to that title.

Once again Shamrock Rovers went down fighting with a late Orhan Vojic strike leaving the locals looking a little anxious in the run up to full-time.

But goals from Pat Hoban and Michael Duffy were ultimately enough to take them second in the table and well within striking distance now of Stephen Bradley’s side.

For an hour or so, Vinny Perth’s looked entirely like their old selves, using the ball well when they had it and tirelessly chasing it when they did not.

Key players in every area looked to have rediscovered something approaching their own best form but it was collective flow of it all that gradually got the crowd going, with the hosts setting the sort of tempo that a full-strength Rovers side would sure have found very hard to live with.

With Lee Grace and Trevor Clarke suspended, though, the Rovers back four had a decidedly makeshift look about it.

Ronan Finn, who had spent a portion of the second half of Tuesday’s defeat to Bohemians at right back started there this time. And with Seán Kavanagh having failed to recover from the knock he picked up in the same game, 16-year-old James Furlong was handed a first-team debut at left back. The bench, meanwhile, was largely populated by teenagers.

For all of their problems, though, Rovers still started well and seemed for a while as if they might defy the odds in much the same way they had with nine men in midweek.

The spine of the side looked solid through the opening stages with the defensive midfielders more than holding their own while Jack Byrne, deployed again as a 10, looked endlessly anxious to get on the ball and, when he did, well capable of creating problems for the hosts.

The couple of real note, though, came to nothing with Dan Carr and Aaron Greene not quite able to get a decent shot away and their early momentum was lost around the midway point in the half as Dundalk, after some poorly judged balls early on, found their rhythm and range.

Duffy should have had them in front just short of the half hour after some good passing by Pat McEleney and Hoban but the Derryman’s first touch was uncharacteristically heavy, giving Alan Mannus the opportunity to gather at his feet. From then on, though, the Lilywhites began to take control.

Furlong struggled at times to get to grips with Seán Gannon’s runs and two in quick succession ended with low balls across the face of the goal that the right back couldn’t quite believe weren’t turned home.

Rovers were suddenly finding it hard to engineer some relief from the pressure and a breakthrough seemed inevitable.

It finally came five minutes short of the break when Hoban met Duffy’s corner from the right with a wonderful diving header that flew into the bottom left corner of the net.

That was precisely where Duffy sent his shot 15 minutes into the second half to make it 2-0 after Daniel Kenny had fed Gannon again for the cross.

It might have been three within a matter of minutes but Duffy’s first-time shot drew a magnificent stop from Mannus.

Stephen Bradley brought on Vojic and Brandon Kavanagh in the hope of sparking a reaction and there were some signs an improvement.

But Byrne’s bids to channel possession into something tangible were initially snuffed out by opponents who now looked as though they had the measure of him and were more than a physical match.

By the end, however, Roberto Lopes had a goal disallowed for offside while Vojic had capitalised on a slip by Daniel Cleary to pull a goal back.

It wasn’t enough but Rovers managed to send a message of their own. Dundalk will have to play like this an awful lot more if they are not to have that title taken from them.