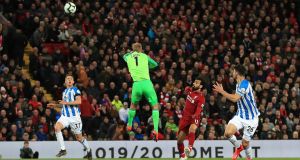 All Liverpool can do is win and hope. Jürgen Klopp’s rampant team fulfilled the first part of their Premier League title requirement with a rout of Huddersfield Town at Anfield. Top of the table with two games to go, their longing for a favour now turns towards Burnley on Sunday.

Jan Siewert’s relegated visitors were made to look a Championship team from the first minute as Liverpool cruised back to the summit in record-breaking fashion.

Mohamed Salah marked his 100th appearance for the club with his 68th and 69th Liverpool goals, breaking long-held Anfield records for the most goals scored in a century, while Andy Robertson provided his 10th and 11th Premier League assists of the campaign. Sadio Mané also scored twice, and was only denied a hat-trick of headers by the woodwork, while Naby Keïta started the rout from kick-off.

The loudest cheer of the night, however, was for Alex Oxlade-Chamberlain on his return to the side following a desperate fight against injury. He almost celebrated the comeback with a goal too as Liverpool equalled their biggest win of the season.

An opponent that had been relegated in March and collected a pitiful four points since November were always welcome for a team chasing the title, yet it was still a surprise how obliging Huddersfield proved to be. They gift-wrapped Liverpool their quickest goal in the Premier League era – timed at 15 seconds – with an opening that defined naivety and ineptitude.

The visitors opted to play out from the back with their central defenders out wide against a Liverpool side rather well known for its prowess in the press, or should be. Goalkeeper Jonas Lössl passed the ball out to recalled central midfielder Jon Gorenc Stankovic who took far too long in possession and invited Keïta to close him down. Stankovic’s attempted pass found Salah, who released Keïta through the gaping hole in the Huddersfield defence to score with a low finish off the inside of Lössl’s far post. Liverpool’s 100th goal of the campaign in all competitions would have settled a few nerves inside Anfield, had there been any.

Of more concern to the home crowd was Roberto Firmino’s absence with a minor muscle problem reported after training on Thursday. The influential Brazilian is not expected to miss Wednesday’s Champions League semi-final first leg in Barcelona, however, and his omission was offset by the return of Oxlade-Chamberlain to the Liverpool squad for the first time since suffering a serious knee injury one year and two days ago. Daniel Sturridge took Firmino’s place in the starting line-up.

In fairness to Huddersfield they responded well to their calamitous start and took the game to Liverpool for a brief spell. Two dreadful corner routines and weak shots from Stankovic and Steve Mounié provided a further reminder of why they are rooted to the foot of the table.

Liverpool doubled their lead from a familiar source when Robertson collected Virgil van Dijk’s pass out on the left and, under no pressure, delivered a pin-point cross into the heart of the opposition penalty area. Mané, under no pressure from Terence Kongolo, headed his 10th goal in the last nine games beyond the exposed Lössl. It was Robertson’s 10th Premier League assist of the season, making him only the third defender to reach double figures behind Leighton Baines and Andy Hinchcliffe.

The Scotland captain has an internal competition with Trent Alexander-Arnold over which full back will provide the most assists this campaign and the 20-year-old responded in kind on the stroke of half-time. The right back floated a delightful ball in the channel between Kongolo and Erik Durm for Salah to sprint through on goal.

Huddersfield’s goalkeeper charged out and the Eygpt international accepted the invitation to lob the ball into Lössl’s empty net. Records have tumbled throughout Salah’s time at Anfield but a 68th goal in a century of Liverpool appearances is a staggering achievement.He equalled Roger Hunt and Sam Raybould for the most number of goals in his first 100 games for the club.

The only possible concern for Liverpool on the night was injury to a key player. Anfield hearts were in mouths, therefore, when Van Dijk stayed down after Mounié landed on his left foot following an aerial challenge. The Dutchman soon declared himself fit, to mass relief, to help keep a 27th clean sheet in his 50th league appearance for Liverpool. That half century has featured only four defeats.

Another glowing statistic on the night that reflects the foundation of Liverpool’s title challenge was the 20th clean sheet kept by Alisson, the goalkeeper equalling the club record set by Pepe Reina in 2005-06 and 2008-09. The Brazilian would have been kept waiting for a share of the record had Karlan Grant connected in front of an open goal when Juninho Bacuna’s shot deflected his way, or Mounié moved with any degree of urgency when played clean through. Both opportunities were squandered before Bacuna drew a fine save from Alisson with a fierce long-range drive.

Huddersfield had conceded four goals in three of their previous five games and it was always only a matter of time before the outclassed visitors made it four in six.

Salah had gone close to another memorable goal at the Kop end when he sent a half volley just wide after flicking the ball over Kongolo. From their next attack Jordan Henderson whipped a first-time cross in from the right and Mané, despite being in a penalty area containing five Huddersfield players, was unmarked to steer his second header of the game beyond Lössl. It was Mané’s 20th league goal of the season, a career first for the Senegal international.

Salah sealed the rout from Robertson’s low centre late on, the left-back’s latest assist drawing him level with Baines and Hinchcliffe and enabling the striker to set yet another milestone. – Guardian