Byrne and Greene double up as Shamrock Rovers rout Waterford 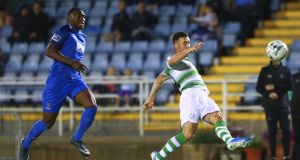 Long-range specialist Jack Byrne and Aaron Greene scored a brace each for Shamrock Rovers as they cut the gap on leaders Dundalk to four points.

Struggling Waterford pulled one back through Cory Galvin 14 minutes from the end before teenager Thomas Oluwa added a late fifth for the Hoops.

Pre-match portents made for a predictable opening. Waterford, with only one league win since May, were nervous from the outset against a Rovers outfit on an unbeaten in six domestic matches.

Only two minutes were on the clock when they were exposed from a set-piece, yet Lee Grace somehow managed to head wide from six yards.

Another of Byrne’s delicious corners provided a 20th-minute chance but a different unmarked centre back, Roberto Lopes, also aimed off-target.

It was all pointing to a breakthrough for the away side and it arrived five minutes later in spectacular fashion.

There appeared to be little danger when Byrne received a pass from Gary O’Neill 30 yards out.

However, he availed of the space to advance and crack a shot into the top corner despite Matt Connor getting an outstretched hand to the effort.

It took just another five minutes for a replica strike to be unleashed from the right boot of Byrne.

This time he brushed off the challenge of Tom Holland to get a sight on goal before finding the net with a another dipping piledriver.

Connor prevented the Blues conceding a third moments later by keeping out Graham Cummins shot with his legs but relentless Rovers continued their dominance after the break.

A couple of defensive howlers helped their rout. On the hour, JJ Lunney’s needless back-pass from the halfway line was pounced upon by Greene, who raced clear to fire home.

Waterford eventually got in on the act of rattling the net from distance. Galvin showed neat footwork to cut inside and beat Alan Mannus with a 25-yarder before the cushion was restored with a tap-in for Oluwa from Graham Burke’s centre.

1 Tipping Point: DeChambeau’s transformation raises questions, but who will ask them?
2 Pete Sampras: The forgotten great with the best serve in the business
3 Game Changers: Vincent O’Brien, a pioneer who took Irish racing to the world
4 Mental clarity in chaos: Novak Djokovic, the man who turned two into three
5 Super Rugby AU offers glimpse of rugby’s future if law changes are adopted
Real news has value SUBSCRIBE