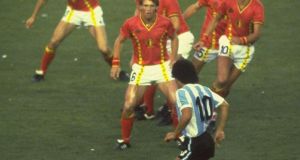 Diego Maradona confronted by a posse of Belgium defenders during the 1982 Wold Cup in Spain. File photograph: Allsport

With the death this week of Diego Armando Maradona from a heart attack the most extraordinary Argentine life of them all has come to a close.

Buenos Aires is a city mourning, shocked that someone who had loomed so large in the public mind for so many decades is now gone. Many among the huge crowds that filed past his coffin in the Casa Rosada were in tears. Others hung around outside in the Plaza de Mayo just staring into the middle distance, many clutching small photos of their idol.

Football occupies such a central role in the Argentine psyche, something that even Brazilians cannot fully understand until they visit, that this outpouring of grief for the greatest player the country ever produced is only to be expected. It is a farewell to a preternaturally gifted artist with the ball whose bronca – the spirit of defiance that is the heartbeat of Argentina’s football – endeared him to his compatriots.

So mixed up is football in Argentina’s image of itself Maradona is even the man who managed to extract a measure of revenge for his country’s defeat in the Falklands War. By four years later beating England in the quarter final of the 1986 World Cup in which he scored two of football’s most iconic goals, one of which is still endlessly argued over and one which brooks no argument.

A child prodigy who said his dream was to win the World Cup for his country he delivered on his promise two games later on a glorious June afternoon in Mexico City’s Aztec Stadium. Nowadays it seems so obviously predestined to see the iconic photos of Maradona with Fifa’s famous golden trophy that it is largely forgotten he entered the tournament perceived to be at risk of seeing his career slip past without his potential being fulfilled.

Maradona wrote later he understood immediately victory was the sublime moment of his life. In a country so wounded by its own history, and desperate for foreign approbation, this triumph gave Maradona a messianic aura among Argentines that might have dimmed at times during the scandals of the long second act of his life but was never close to being extinguished.

Football though only partially explains Argentina’s identification with Maradona. At the height of his career Peru’s Nobel laureate Mario Vargas Llosa wrote of him: “A great player? More than that: one of those living deities men create to worship themselves in.” For millions of Argentines Maradona was both a popular saint and their own image reflected back at them, someone who understood football was first and foremost about the people’s passion.

Despite becoming the best known Argentine in history to the people back home he was always ‘one of us’. His huge personal charisma was of a very ordinary – in the best sense – Argentine type. The title of his 2000 autobiography - I Am The Diego (. . . of the people) - was perfectly chosen.

Unlike Pelé before him or his peer Michel Platini he never sought to translate his success in the game into a place in the sport’s establishment and the friendships that brings in the political and corporate worlds. He was too attached to his image as a rebel outsider that saw him tattoo the face of the Argentina revolutionary Ché Guevara onto his right arm.

He was the pibe from the barrio, the cheeky street urchin who grew up in public and even when his life spun out of control never sought to hide his failings. At huge personal cost his life was an open book, his compatriots invited to read each page. Despite occasional complaints about being hounded it was a role he embraced.

He was outspoken, irreverent and often acidic. He milked his singular fate for what it was worth, partying with the mafia in Naples (who gave him a new Volvo) and later recuperating from his cocaine addiction while a guest of Cuba’s Fidel Castro (whose face he tattooed on his left calf).

He combined his role as a self-styled tribune of the people with an extravagant tabloid lifestyle replete with falling outs with football clubs, business managers, doctors, and eventually even his own adored family. Some among Argentina’s haute bourgeoisie muttered at how tacky it all was but for millions of others he remained utterly authentic and true to his roots.

Unfortunately drugs came to dominate the narrative after the football ended. In a historic 1996 interview he admitted: “I was, am and will be an addict. Every day I have to say to myself I will fight against this inferno of drugs.” It is easy to blame drugs and those who supplied them to him for what went wrong in Maradona’s life and he clearly had an addictive personality. But drugs were also his false refuge from the incredible pressures caused by living in the public glare.

Without football his soap opera life eventually turned ghoulish. He almost died in 2000 from a heart attack following a cocaine binge while in Uruguay. It was following that scare that as the guest of Fidel he went to Cuba for treatment from where a video leaked of him snorting cocaine while having sex with his teenage girlfriend.

When in 2004 he returned to Buenos Aires he was an obese wreck. In an appearance on a talk show hosted by another Argentine icon Suzana Giménez he was sweating bullets and slurring his words as he slipped off his armchair during their interview.

Shortly afterwards he was rushed into intensive care and once again there were fears for his life. Fans held a vigil outside his hospital while at football grounds around the country the old cry rang out: “Maradooo! Maradooo!” Many feared then it was a farewell salute. But he improved and after 12 days he checked himself out against his doctors’ advice. A few days later he was back following “dietary transgressions”.

His family eventually got him committed to a psychiatric hospital. Even then his personal physician tried to go around Maradona’s ex-wife and two daughters - who had taken charge of his treatment - by seeking to involve the country’s president in a reckless effort to get him released.

He would eventually recover and after a gastric bypass in Colombia in 2005 look fitter than at any time since he quit the game. He finally appeared to have made peace with his retirement and whatever personal demons this had allowed to run out of control were largely under wraps, until this year’s final decline.

Back in 2005 Maradona marked his return to health by hosting his own talk show, The Night of the 10, which ran for 13 episodes. On the first show his special guest was Pelé, the Brazilian legend and his only rival for for the title of greatest player of all time. The two had sparred with each other over the years but on Diego’s show they chatted away, two old pros who for all their rivalry recognised each other’s genius as only someone else in the pantheon can.

In recent years when it comes to defending his status as the greatest ever Pelé has shifted focus away from Maradona. Now in his genial way he seeks to deny the claims of another Argentine, Lionel Messi. As a far more disciplined player than Maradona in a far more professional age the Barcelona attacker has provided plenty of statistical ammunition for those who would push his claims as the greatest player ever.

But just try arguing that with anyone in Buenos Aires.