Disabled fans find themselves left outside in the cold, with few people willing to help 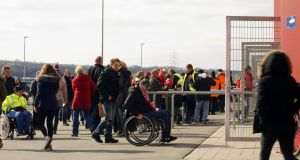 I will always remember my first few games at Camp Nou in Barcelona. The first was against Celtic in a Champions League group match in 2013. It was a total fluke that we got the ticket, my brother disguising us as Celtic fans and using some contacts in Celtic’s Irish Fan Group. I’m sure they sussed eventually why I was there, it was to see the boys in Blaugrana score six goals against Celtic.

Ironically it was my first time seeing Liverpool defender and pretty much best defender Virgil van Dijk and to be honest, he didn’t look that great . . . but that could have been down to the fact I was incredibly high up in Gol Nord, and after every goal, jubilant fans would leap up, and I wouldn’t see a thing. I can’t blame the fans, it was the fact the wheelchair section isn’t high enough to see over standing fans, and some fans even began describing every move they would stand for.

It was one of those situations where I was grateful to be there, and the atmosphere and warmness of the fans kept me chirpy, but after paying €90 to miss all seven goals that were scored that night. My brother and father kept the spirits up, despite they too missing half the action. At one stage, my father went old school and sat me on his head to get my panorama photo of the stadium.

Flash forward six months, and I go back on my 18th birthday to see Barcelona play Athletic Bilbao. This time things were crazier as the “wheelchair” ticket was quite literally only for my chair to go in. I had to park up and go down some steps for my actual seat. Thankfully, I’m not a big unit, so I took out my wheelchair’s seat cushion and sat in between my parents with all the fans immersed in the atmosphere. Two Athletic Bilbao fans sat in the empty seats we weren’t allowed to occupy and minded my wheelchair for me. My wheelchair and the Athletic fans had a great time.

Weirdly, that was one of my favourite games, but the fact I could physically move from my wheelchair spared everyone’s blushes and prevented my parents’ blood pressure reaching deadly levels. Sure, these are all humorous stories and ones that we can reflect on and have a good laugh at but, to be honest, sometimes I feel if we didn’t laugh, we would probably cry.

As we all know, the women’s football All-Ireland semi-finals had a history-making day in GAA HQ. For fans that are also wheelchair users, it gave me flashbacks to my second day in Camp Nou. As comfy as it sounds, the wheelchair users and their carers were allowed into GAA corporate boxes, but as more and more turned up, it wasn’t a feasible solution.

I get why this was done: the Cusack Stand wasn’t open, it would’ve been incredibly weird to put fans with a disability into an empty stand, that’s a given. A corporate box is nice and luxurious, and they are there to make relationships on and off the field, but the only relationship that developed was one of frustration and annoyance.

Stewards and everyone in LGFA and Croke Park were incredibly helpful. I did my party trick of taking my seat out of my wheelchair to put into a usual seat, but you could see other fans were just behind glass trying to see or resorted to watching on TV. While for agile people like me it was a seamless transition, for others it is simply not good enough.

This isn’t a GAA problem either. The Premier League has reported that only 14 out of 20 clubs are at the recommended standard, with the likes of Crystal Palace, Chelsea and Everton lagging behind, despite TV rights generating £8.4 billion (€9.2 billion) in revenue and recommendations for the league’s clubs to use this money to develop wheelchair bays.

While clubs are facing non-stop legal threats, disabled fans find themselves left outside in the cold, with few people actually willing to help. Those that do help simply can’t do enough but they are few and far in between. West Ham are the only Premier League club to have a fully equipped wheelchair toilet. And, of course, we had Rangers fans tearing down the only roofed disabled shelter in Scotland.

At the end of the day, fans will still go. Some of our standards are so low, sometimes even the tiniest thing can get us excited like being able to see the game, pop to the loo or not get soaked on rainy days. Communication, not cost, are essential, along with interpretation of everyone’s needs.

Disability charities, architects, facility designers and sporting organisations need to come together and become pro-active. It’s time for real change and action, rather than the sideline criticism.