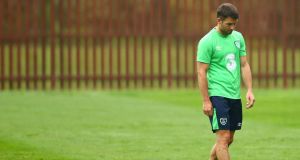 A street footballer, a once-in-a-generation talent, the anthithesis of an Irish player. There are more than a few descriptions of Wes Hoolahan but perhaps the one that best suits his Ireland career is underused.

In the 110 games Ireland have played since Hoolahan made his debut against Colombia in 2008, the 35-year-old has featured in less than 50 per cent of them – 43 appearances to be exact.

After excelling at schoolboy level for Belvedere, the Dubliner really burst onto the stage in Ireland and beyond when he was a key figure in Shelbourne’s European run in 2004 which saw them reach the Champions League third qualifying round where they lost out to Deportivo La Coruna.

However, Hoolahan had shown the type of creativity, passing range and football brain rarely seen in Irish players and, in 2005, earned a move to Livingston in Scotland. After two years there he completed a transfer to Blackpool before joining Norwich City in 2008, the same year that he would earn his first Ireland cap.

While the five foot six inch playmaker had previously featured in an Ireland senior squad in 2002 at the age of just 20, he had been an unused substitute for Don Givens side when they took on Greece.

Six years later, in May 2008, he made his debut in a friendly win over Colombia at Craven Cottage when he came off the bench. However, little did everyone know that this was just the start of a saga that would see him wait a full five years before making his first competitive appearance.

That 1-0 victory over Colombia was Giovanni Trapattoni’s second game in charge of Ireland and the beginning of what would be a four-and-a-half year absence for Hoolahan from the Ireland team.

With the Italian manager instead preferring to focus on the bigger, stronger players available to him – frequently alluding to the fact that Ireland did not have the talent at their disposal to play a creative game – Hoolahan was shunned from the international setup despite being a regular for Norwich in the Championship and the Premier League. Even as Ireland reached their first major tournament in 10 years when qualification was secured for Euro 2012, Hoolahan was left at home to watch the three-defeat nightmare unfold in Poland.

It would not be until November 2012 that Hoolahan would don the green jersey again in a friendly defeat to Greece in Dublin. Four months later he would score his first international goal in a 2-0 friendly win over Poland before, finally, making his competitive debut away to Sweden the following month. Hoolahan came off the bench in that 2014 World Cup qualifying 0-0 draw in Stockholm and, at the age of 30, was already being considered as a wasted talent on the international stage.

A player like Hoolahan doesn’t come around too often for any team, much less Ireland, but his record will always be tainted by the fact that he did not play one competitive game for his country during his 20s.

In June of 2013 he made his first competitive start for Ireland in a 3-0 win over the Faroe Islands. Three months later Trapattoni’s reign as Ireland manager would come to an end and, many hoped, Hoolahan’s career as a regular on the international stage could finally start.

In the 65 games that Trapattoni took charge of Ireland, Hoolahan featured in just seven.

In November 2013 O’Neill took charge of his first Ireland game and Hoolahan came straight into the starting lineup for a 3-0 friendly win over Latvia. It was a new dawn for the man from Killarney Street in Dublin’s north inner city and would see him go on to make 36 appearances for Ireland in his 30s.

Hoolahan would play a key part in Ireland’s Euro 2016 qualifying campaign, as well as both legs of the playoff win over Bosnia and Herzeogovina. However, it’s the tournament itself that he will be best remembered for.

In Ireland’s opening Group E match against Sweden in Paris, Hoolahan fired home a right-footed strike to give O’Neill’s side the lead before a Ciaran Clark own goal meant that both sides had to settle for a point.

Nine days later, after a loss to Belgium, Hoolahan would again be at the centre of proceedings on that night in Lille. Needing to beat Italy to qualify for the last 16, Hoolahan looked to have blown Ireland’s best chance of the game when he missed a one-on-one opener in the 84th minute with the scores locked at 0-0.

However, it’s the mark of a great player that he was able to shrug it off so quickly and set up the winner for Robbie Brady. Just a minute later Hoolahan received the ball on the right, swivelled and delivered a perfect cross into the penalty area for Brady to head home and ensure Hoolahan’s place in Irish football folklore when, just three years earlier, he would barely have featured as a footnote.

With his mid-30s fast approaching Hoolahan’s international career was always going to end one of two ways – in a first World Cup appearance in Russia or in disappointment as Ireland’s barren run goes on in qualifying for the biggest tournament of all. Sadly it was the latter and the 5-1 trouncing by Denmark in Dublin last November will be etched as the end of the road for Hoolahan, Daryl Murphy (who also recently announced his retirement) and at least a few more players, one would imagine.

Hoolahan is one of the many Ireland players never to have worn the green jersey at a World Cup but, were it not for O’Neill, he may never have played at a major tournament at all. For a man who took Eric as his confirmation name in honour of childhood hero Cantona it is perhaps fitting that his finest moments for his country came in France.

1 My favourite sporting moment: Donegal and Kildare’s high summer street opera
2 Ken Early: Mick McCarthy II was no blockbuster, more of a flop
3 New PGA Tour schedule could bring an end to the year like no other
4 Proposals for an annual Club World Cup seem fanciful at best
5 Liverpool reverse decision to use government furlough scheme
Real news has value SUBSCRIBE
Crossword Get access to over 6,000 interactive crosswords