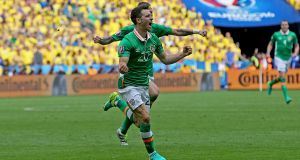 Ireland’s Wes Hoolahan celebrates scoring the first goal of the game in a draw with Sweden at Euro 2016. Photo: Donall Farmer/Inpho

Wes Hoolahan has announced his retirement from international football after 43 appearances for Ireland.

The Norwich playmaker, who turns 36 in May, has told The Herald “It wasn’t an easy decision to make, to retire, but I feel it’s one I had to make and this is the right time to do it.”

Hoolahan last played for Ireland in the 5-1 World Cup playoff defeat to Denmark in November, ending one of the most debated Irish careers to date.

Despite being lauded by many as Ireland’s best player, the former Shelbourne man only appeared in one major tournament in a green jersey, scoring the equaliser in Ireland’s opening Euro 2016 draw with Sweden. He also set up Robbie Brady for a memorable winner against Italy in the final group game to book a place in the last 16.

However, before Martin O’Neill took up the manager’s post, Hoolahan was rarely played by Giovanni Trapattoni, sparking much debate between pundits and fans alike as to why one of Ireland’s few creative players wasn’t even playing.

“It’s a mixture of things that led me to make this decision but mainly age, I will be 36 soon, I’ll be 38 when the next Euros come around, so it’s time to move aside.

“I had two great campaigns with Ireland and the Euros in France was an amazing experience.”

Hoolahan told O’Neill last week of his decision and said that the manager understood it was the right time to go. He becomes the second Ireland player to retire since the Denmark defeat with Daryl Murphy also recently calling it a day.

Ireland don’t play again until March when they meet Turkey in a friendly before playing France in March with the Nations League set to get underway in September.

1 Six Nations: Ireland are contenders but England still the team to beat
2 Gary Neville in Qatar an exercise in semi-journalism
3 Mike Catt hopes to have Irish backs purring in Six Nations
4 Owen Doyle: Creeping professionalism of schools rugby a threat to the game
5 The world spins but it’s soon back to Dublin and Kerry
Real news has value SUBSCRIBE
Crossword Get access to over 6,000 interactive crosswords