Tottenham's Son one win away from avoiding military service 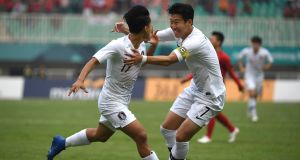 Under South Korean law all men have to carry out 21 months of military service before the age of 28 and the Tottenham forward, who turned 26 last month, had been running out of time. However, an Olympic medal earns sportsmen an exemption, as does winning gold at the Asian Games.

So if South Korea, the defending champions, can beat Japan in Saturday’s final, Son will be free to continue playing for Spurs and the national team.

Son featured as a substitute in Tottenham’s opening Premier League win at Newcastle but has since been absent in order to take part in the tournament, where he played in Wednesday’s 3-1 semi-final win over Vietnam in Cibinong. Two goals from Lee Seung-woo, the second of which was created by Son, and one from Hwang Ui-jo secured a comfortable victory.

“We are so close to gold,” Son said afterwards. “We fight for that. I don’t need to say anything, I am ready for that.

“We deserved to win, we had lots of chances to score. I think we are better players so we dominated the game.”

Spurs, anxious at the prospect of losing their influential attacker, swiftly tweeted their congratulations. – Guardian service