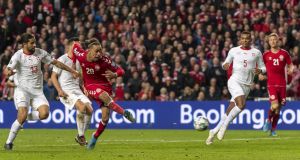 Switzerland’s habit for conceding late goals in Ireland’s Euro qualifying group continued as they allowed Denmark to snatch an unlikely winner in Copenhagen on Saturday night.

Victory for Åge Hareide’s side – hugely helped by a string of saves by Kasper Schmeichel – gives them the upper hand heading into the business end of the campaign.

They had started the day, in terms of points dropped, trailing the Swiss and Irish but all changed between Mick McCarthy’s side slipping up in Georgia and this triumph.

Christian Eriksen, who’d been subdued for most of the game, created the solitary goal at the Parken Stadium by releasing Yussuf Poulsen with a reverse pass. The striker scampered clear and slotted past Yann Sommer from the edge of the penalty area.

It was a difficult result for the Swiss to take, given they had generated the best of the chances. In each half, with the game scoreless, Schmeichel tipped shots onto the crossbar.

“Only for their goalkeeper, we would have scored three goals,” said Swiss manager Vladimir Petkovic afterwards.

“It was still a good performance and we can take that into Tuesday’s game against Ireland.”

A draw would not be the worst result. They follow Tuesday’s game with Ireland by facing Georgia and Gibraltar in a double-header next month. A seven-point haul is well within their grasp, meaning Ireland would have to beat Denmark to usurp them.

Hareide was back on the sideline after knee surgery and Andreas Cornelius was back on the pitch following a longer absence. He last played for his country in November but was repaid his manager’s faith by dominating the aerial battles in the first half.

The home side found their two sights on goal from his knockdowns. Firstly, Martin Braithwaite’s shot was blocked by Stephan Lichtsteiner before Eriksen scuffed his effort from 10 yards.

It was the Swiss who came closest to the breakthrough when Granit Xhaka skipped past Eriksen and saw his left-footed curler touched onto the upright.

Schmeichel was again at his brilliant best to deny Admir Mehmedi with another one-handed save after the Wolfsburg player sprung the offside trap to connect with a volley.

Switzerland continued to maximise the width of their wing backs after the break and Ricardo Rodriguez’s screamer skimmed the crossbar following another decisive fingertip save by the Danish custodian.

Despite pleas from the home crowd for their side to attack, Denmark were sluggish in attack, with Thomas Delaney’s downward header that bounced wide the best they could conjure.

That was until a piece of brilliance of Eriksen settled the game.

With his back to goal near the left touchline, he spotted the run of Poulsen raiding clear. The RB Leipzig player kept his cool to slot the ball past the advancing Sommer.

Schmeichel’s work was done. Deep into stoppage time, Delaney’s backward header from a deep free kick was angling towards the bottom corner until the Leicester City man crouched low to prevent it crossing the line. He deserved all the accolades at the end.

1 England v Ireland preview: Ireland’s revival to face its sternest test
2 French new wave stay on course for Grand Slam
3 Devin Toner: it ‘means the world’ to be back in the Ireland side
4 Matt Williams: Ireland will need to step up on Wales display to prevail at Twickers
5 ‘Manchester United are lucky to have you’: Klopp responds to Donegal schoolboy’s letter
Real news has value SUBSCRIBE
Crossword Get access to over 6,000 interactive crosswords