Meyler tells Coleman Marco Silva will be ‘brilliant for Everton’ 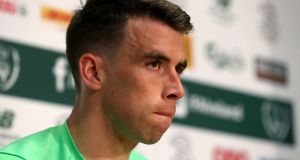 Seamus Coleman: “It’s up to the players now to step up and make sure this manager stays in the job.” Brian Lawless/PA

David Meyler has told Seamus Coleman to expect great things from new Everton boss Marco Silva with the former Hull City midfielder confident that his one-time boss will get the best out of everyone at Goodison Park including his Ireland team-mate.

“I said to Seamus: ‘he’ll be brilliant for Everton,’ says the 29 year-old who, like the Donegalman, is a part of the Ireland squad currently preparing for Saturday’s game against the USA.

“In the time I worked with him, the six months, he was fantastic, it was really enjoyable. His analysis of everything, the way he wants to play... he’ll encourage Seamus, he’ll make Seamus an even better player and Seamus will thoroughly enjoy working with him.”

The Everton right back seemed happy with the recommendation and expressed the hope that the appointment of the Portuguese, who won a second division title with Estoril, a cup with Sporting Lisbon and a Greek league with Olymiacos, before spells with Hull and Watford in England, might mark the end of the managerial merry-go-round in the blue half of Merseyside.

“David Meyler has had him and said he’s a great manager, so it’s up to us now at the club to kick on and try to do really well because we’re chopping and changing managers quite a lot. It’s up to the players now to step up and make sure this manager stays in the job.

“There’s no secret about it, at club level this season, we were nowhere near good enough. The expectation at the start of the season definitely wasn’t fulfilled, so we’re all disappointed by that. We know the fans expect better.”

Coleman cautiously acknowledges that Silva, a young manager with a reputation for encouraging attacking football with a particular emphasis on width, could well be good for him. But he is anxious not to be seen to be disrespectful to Sam Allardyce, the inevitable fall guy, he suggests, for a wider failure at the club last season.

“Listen, I respect every manager who comes in to Everton Football Club because they’re all coming in to do the right thing, try to win games. Some styles, people like, some styles, people don’t like but I worked extremely hard for the [last] manager and I respect what he did. He worked hard to try to get us up the league and unfortunately for him, he didn’t get to stay on.

“Now, this new manager coming in, there is this expectation that the style he plays will be good for full-backs and very exciting. But it’s always very easy for us players to hide behind managers. We have had three or four now and maybe we get away with a bit of the stick that’s flying around because it’s always on the manager’s toes, whether that be Roberto, Ronald, Sam or ‘Moyesy’ before that.

“It’s about time us players now need to step up to the plate. We’ve not been close to winning something for a long time and at Everton, that’s what we want, that’s what I want.”

Meyler expressed disappointment over the way his own stint at Hull City ended with the club, he says, seeking to have him accept a pay cut in order to secure a contract extension.

“When it came to my contract extension, the club chose not to give me the contract that I was on,” he says. “They wanted to negotiate a new contract. The manner in which it was dealt with was disappointing. I felt that with my service there, the time and what I had achieved there, I felt the club talked about respect but I thought I probably wasn’t shown the respect that I deserved.

“I found out my contract hadn’t been extended through the press officer, which probably isn’t ideal.”

His departure, he suggests, is just another example of the excessive level of player turnover at the club with the number coming and going last summer, he believes, hampering the club’s chances of challenging for promotion.

Derby County, meanwhile, managed that, finishing sixth before losing out in the play-off but the club subsequently lost its manager, Gary Rowett, to Stoke City and former England midfielder frank Lampard yesterday became the seventh “permanent” appointment to the post since Steve McClaren first landed the job in October 2013.

Buttler and Woakes drag England from the brink to set up thrilling Pakistan win 19:30
Waterford draw blank against Cork as second Covid-19 test returns nagative 19:17
Serena Williams ready for a socially distanced US Open 18:22
Rory McIlroy puts integrity ahead of glory in US PGA second round 17:45
Bottas edges Lewis Hamilton to take pole at Silverstone 15:42

1 Rory McIlroy puts integrity ahead of glory in US PGA second round
2 Frustration for Lowry and McIlroy as Li leads at US PGA
3 Michael Walker: Pressure mounts on Barcelona to stop slide
4 Sporting Cathedrals: Semple Stadium, the very centre of the hurling universe
5 Serena Williams ready for a socially distanced US Open
Real news has value SUBSCRIBE
Crossword Get access to over 6,000 interactive crosswords