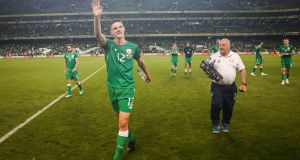 Declan Rice waves to the crowd after the international friendly against the USA at the Aviva stadium in June 2018. Photograph: Ryan Byrne/Inpho

In an apparent attempt to avoid embarrassment on Sunday night when the annual event takes place in RTÉ, the FAI has issued to a statement to confirm that Declan Rice had been named as its Young Player of the Year but won’t be about to get his award.

The award is one of a number decided on by a panel drawn from members of the Soccer Writers’ Association of Ireland (SWAI). When they met, in January, Rice’s international future was still up in the air but as the criteria for winning it was to have been the best senior Irish player under 25 during the year in question, 2018, and Rice had been that by some distance, it was decided to go ahead and give it to him.

The association, unsurprisingly, appears to have been more concerned about the decision after Rice made his and it is understood that there was a desire to avoid Mick McCarthy’s first actual day with the squad being overshadowed by another story about the West Ham midfielder.

The SWAI members involved were apparently asked to meet again and did so but decided that, on the basis that the rules had not changed, they would stick with their original call. While the other winners are usually not made known until the night, the FAI has clearly now chosen to get the Rice story out there early so as to get the reaction over with before the weekend.

“The Football Association of Ireland can confirm that West Ham United’s Declan Rice has won the Young Player Of the Year award at the 29th ‘3’ FAI International Awards taking place on Sunday, March 17th,” the statement reads.

“The award was voted for by members of the SSE Airtricity Soccer Writers’ Association of Ireland. At the time of the vote, Declan Rice was an Ireland international and qualified for the Young Player category in a year that saw him win three senior caps, all in ‘3’ International Friendly games.

“Declan Rice has since opted to switch his allegiance to England. The FAI has completed his international transfer via the FIFA protocols and wishes him well in the future.

“This award maintains the integrity of the voting process in conjunction with the Soccer Writers’ Association of Ireland and the FAI thanks the jury members for their decisions relating to the awards. Declan Rice will not be in Dublin for the ‘3’ FAI International Awards ceremony, which will be live on RTÉ2 from 20:30.”

Even after Rice’s defection, the field for the Young Player award shows some signs of broadening out again. The hope will be that the competition for Goal of the Year is a bit hotter next year too. In 2018, the Irish senior men’s team scored just four goals and a decision was taken to allow those scored by other Irish teams to be nominated too for the first time.