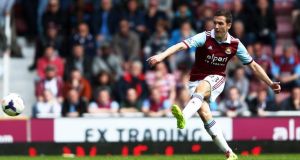 Stewart Downing of West Ham scores his team’s second goal from a free kick during the Premier League match against Tottenham Hotspur at the Boleyn Ground. Photograph: Paul Gilham/Getty Images

West Ham 2 Tottenham 0: Sam Allardyce emerged triumphant from what has been called the P45 derby, with West Ham securing an unprecedented third win over Tottenham in a single season to ensure survival and heap further pressure on counterpart Tim Sherwood.

Their form heading into the match could not have been any different – the hosts failed to win in April, while Spurs were unbeaten – yet the clubs share similar stories when it comes to managerial uncertainty.

Sherwood’s impressive win ratio has not been enough to stop speculation on his future that will no doubt intensify after West Ham ended a four-match losing streak with a 2-0 win in their final home match of what Allardyce acknowledged has been a “testing campaign”.

The fans made their frustration known during last weekend’s defeat at West Brom with anti-Allardyce chants and banners, although those same supporters will have no doubt left the Boleyn Ground in a better mood after beating Spurs for a third time this campaign.

An even, entertaining opening was blown apart midway through the first half by Younes Kaboul’s red card, which was followed minutes later by Harry Kane accidentally nodding Andy Carroll’s header past his own goalkeeper.

The east Londoners doubled that lead just before the break after Paulinho and Emmanuel Adebayor left an embarrassingly large gap in the wall, which Stewart Downing’s free-kick duly exploited to ripple the back of the net.

Only the inspired form of France goalkeeper Hugo Lloris prevented West Ham from adding more in the second half, with the poor displays of those ahead of him meaning there would be no respite at the end of a difficult week for Sherwood.