The latest injury and suspension news ahead of Saturday, Sunday and Monday’s action 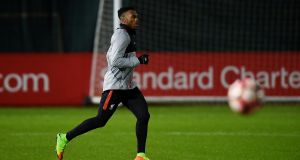 Daniel Sturridge misses out again for Liverpool this weekend, as his team play Arsenal at Anfield on Saturday. Photograph: Getty Images

Henrikh Mkhitaryan is a doubt for United. The attacking midfielder missed the EFL Cup final with a hamstring injury sustained in the Europa League clash at St Etienne. Phil Jones is pushing for a return after a foot injury, while Jose Mourinho confirmed Luke Shaw and Wayne Rooney will be in the squad on Saturday.

Leicester caretaker boss Craig Shakespeare has a full squad to choose from. Strikers Islam Slimani and Leonardo Ulloa are fit again after being included in the side against Liverpool on Monday night for what was Shakespeare’s first game in charge following Claudio Ranieri’s sacking. Ahmed Musa was left out against the Reds for tactical reasons and the Nigerian will hope to be back in Shakespeare’s plans for Saturday as the defending champions look to record back-to-back league wins for the first time this season.

Xherdan Shaqiri looks set to miss out again. The Potters winger has been absent for the last four games due to a calf problem and although he was due to train on Friday, it appears unlikely he will be involved against Boro. Manager Mark Hughes is considering changes from Sunday’s 4-0 loss at Tottenham so Saido Berahino could get his first start and Jonathan Walters is now fit to return to the matchday squad, as is Glen Johnson. It remains to be seen whether Wilfried Bony is involved after he failed to make the 18 at Spurs despite being available.

Middlesbrough head coach Aitor Karanka hopes to be able to call upon defenders Antonio Barragan and George Friend. Barragan has missed the last four games with a hamstring problem, while Friend has sat out the last five because of calf and knee injuries but both have returned to training and could come into contention. However, Arsenal loanee Calum Chambers, who missed last weekend’s 1-0 defeat at Crystal Palace with a foot problem, is likely to remain on the sidelines as Boro look for a first league win since December 17th.
Last season: No corresponding fixture
Last five league matches: Stoke D D L W L; Middlesbrough L D L D L
Top scorers (all competitions): Peter Crouch (Stoke) 7; Alvaro Negredo (Middlesbrough) 7
Referee: Craig Pawson

Luciano Narsingh and Jordan Ayew are in contention to make their first Swansea starts. Holland winger Narsingh and Ghana forward Ayew have impressed from the bench since joining in January, and Swansea head coach Paul Clement says the pair have also been pushing hard in training. Jefferson Montero (hamstring), Ki Sung-yueng (knee) and long-term casualty Nathan Dyer (Achilles) remain out.

Burnley have Jeff Hendrick back but will be without Ashley Barnes for the trip to south Wales. Hendrick has completed a three-game ban following his red card against Watford but striker Barnes was sent off at Hull last weekend and is suspended. Steven Defour (hamstring) is back in training but not ready for action, while Dean Marney and Johann Berg Gudmundsson (both knee) remain out.
Last season: No corresponding fixture
Last five league matches: Swansea W W L W L; Burnley L W L D D
Top scorers (all competitions): Fernando Llorente and Gylfi Sigurdsson (Swansea) 9; Andre Gray and Sam Vokes (Burnley) 7
Referee: Anthony Taylor

Watford will be without Mauro Zarate but could have Daryl Janmaat and Costel Pantilimon available. Winger Zarate has been ruled out for the rest of the season by the knee injury that forced him off in the 1-1 draw with his former club West Ham at Vicarage Road last Saturday. Defender Janmaat (groin), another to come off injured last weekend, is having his fitness checked ahead of potential involvement against the Saints, as is goalkeeper Pantilimon (ankle), who has been sidelined since the end of January.

West Brom will check on the fitness of Matt Phillips after the winger missed last weekend’s home win over Bournemouth with a hamstring injury. He has had a scan on the problem and a decision will be made over his inclusion on Friday. Defender Craig Dawson has been checked over and is fine to play after a bang to the head saw him withdrawn early in the second half against the Cherries.

Liverpool defender Dejan Lovren is set to return after almost five weeks out with a knee injury. The Croatian has returned to full training but striker Daniel Sturridge, having recovered from a virus, is out for at least another week with a hip muscle strain.

Arsenal welcome back Aaron Ramsey and Laurent Koscielny for their trip to Anfield. Ramsey has been missing for the last four games with a calf problem but is now in contention to feature. So too is Koscielny, who missed the FA Cup win over Sutton with a thigh injury suffered in the 5-1 defeat at Bayern Munich. Santi Cazorla (Achilles) is a long-term absentee while fellow midfielder Mohamed Elneny (ankle) is expected to be out for three weeks.
Last season: Liverpool 3 Arsenal 3, Arsenal 0 Liverpool 0
Last five league matches: Liverpool L D L W L; Arsenal W W L L W
Top scorers (all competitions): Sadio Mane (Liverpool) 11; Alexis Sanchez (Arsenal) 20
Referee: Robert Madley

Tottenham are optimistic Harry Kane and Jan Vertonghen will both be available. Kane sustained a knock to his knee against Stoke last weekend while Vertonghen came off as a precaution but the pair are expected to be passed fit. Toby Alderweireld will be given a late fitness test on a groin strain but Danny Rose and Erik Lamela are still out with knee and hip injuries respectively.

Sunderland utility man Jason Denayer will sit out against parent club City. Denayer is ineligible under the terms of his loan agreement although central defender Papy Djilobodji returns to contention after serving a four-match ban. Keeper Vito Mannone has recovered from illness and Billy Jones is available after having stitches in a head wound. Jack Rodwell (hamstring) is being assessed and the game will come too soon for midfielders Jan Kirchhoff (knee) and Steven Pienaar (calf). Paddy McNair, Duncan Watmore, Victor Anichebe (all knee) and Lee Cattermole (hip) are still out.

Andy Carroll is set to replace Michail Antonio in the Hammers squad for the visit of Chelsea. Striker Carroll is fit after missing the last two games with a groin injury but winger Antonio is suspended following his red card at Watford last weekend. Diafra Sakho (back) and Angelo Ogbonna (knee) are the only injury absentees.