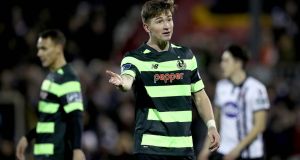 The opening night results mean that while the Dublin derby at Tallaght might attract more attention this Friday, the top of the table clash will be in the unlikely setting of Maginn Park where Derry City take on newly-promoted Limerick.

“It’s a challenge,” says City boss Kenny Shiels, “and the pitch might suit Limerick this week, it’s massive, but I don’t want anyone to be making excuses. We’ll just have to bed ourselves in and make it a difficult place for clubs to come.”

Doing that this evening, he suggests, will be especially difficult, not least because of Rodrigo Antonio Tosi, the Brazilian-born striker who kicked off his league career here with a hat-trick against Sligo Rovers last week.

“He has a good touch but he has presence too and he wants to get on the end of things. Last week was just one game but I think we can go on and score a lot of goals in this league.”

David O’Connor, John O’Flynn and Shane Tracy all miss out again for the visitors while City are without Rory Patterson, Ben Doherty and Harry Monaghan. Aaron Barry may have a late test but Shiels says he is reluctant to risk him at this stage despite the inexperience of the players available to him in defence.

At Tallaght, Ronan Finn is set to start for Rovers but Graham Burke is suspended for a game manager Stephen Bradley says it is “vital” his side wins.

Bohemians travel without Eoin Wearen or Ismahil Akinade who had spleen removed in midweek and faces several months on the sidelines.

Paul Sinnott will be missing with an ankle injury while Garry Buckley is suspended and John Kavanagh out injured for the hosts. Steven Beattie and Alan Bennett seem likely to come into contention.

Drogheda will be without Killian Brennan (collarbone) for the visit of St Patrick’s Athletic but his brother Sean will be in the squad while Liam Buckley is without Darren Dennehy and Aiden Keena (both suspended) although Rory Feely returns from a ban.

Darragh Noone and Conor Earley are available again for Bray but John Sullivan is a doubt while Ollie Horgan must wait to check on Killian Cantwell (thigh) and Jonny Bonner (back).

In the First Division, Athlone Town have announced the appointment of French agent Marc Formeaux as director of first team operations with manager Colin Fortune apparently being edged out by those now in control of the club.