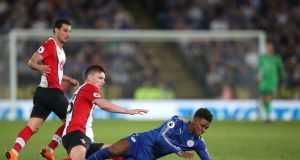 It was the warmest day of the year but Southampton passed up the opportunity to turn up the temperature on those above them in the relegation scrap. Mark Hughes will take some encouragement from the fact that he has picked up his first point as Southampton manager, ending the club’s run of four successive league defeats, and seen his team keep a clean sheet, yet this is a time of the season when the Welshman needs victories rather than draws to improve their survival prospects.

Southampton are now four points adrift of safety with four games remaining and will go into the FA Cup semi-final against Chelsea on Sunday preoccupied with thoughts of trying to claw their way clear of relegation trouble after a goalless draw against a Leicester side that have badly lost their way. Claude Puel, who was sacked by Southampton at the end of last season, has won only four of his past 17 league games, and this was another deeply frustrating evening for the home supporters.

Leicester’s motivation was nothing like as great as Southampton’s here, given what there is to play for at the bottom of the table, yet their poor run of form over recent months has led to player unrest and put Puel under the spotlight. The Frenchman’s response to defeat at Burnley on Saturday was to make five changes including dropping Wes Morgan, the Leicester captain.

It was Puel’s way of shaking things up but there was little reaction on the pitch in the first half and Southampton were looking more and more comfortable by the time the interval arrived. Hughes’s team had soaked up some early Leicester pressure, defended resolutely when required and created a couple of chances at the other end that could easily have brought reward.

Dusan Tadic, totally unmarked on the edge of the area, thrashed a half-volley wide in the 17th minute and Cédric Soares also failed to hit the target as he ghosted in at the far post to meet Shane Long’s cross. Then came an opportunity for Long, three minutes before the break, only for the forward to be caught in two minds as to whether to pass or shoot as he ran at the retreating Harry Maguire. In the end Long did neither as the ball rolled harmlessly into the arms of Ben Hamer, who was making a rare start in place of the injured Kasper Schmeichel, leaving Hughes throwing his arms into the air in despair.

Leicester were flat, much like the atmosphere. Ben Chilwell got into some decent attacking positions on the left flank, especially in the first 20 minutes, but his crossing was poor. The closest that Leicester came to scoring in that opening period was when Kelechi Iheanacho, making only his fourth Premier League start, saw his first shot blocked, picked himself up off the floor and placed his second attempt narrowly wide of the far post with Alex McCarthy, the Southampton goalkeeper, rooted to the spot.

That opening aside, Leicester looked toothless and it was Southampton who threatened again early in the second half. Tadic screwed a ball across the face of goal – it was unclear whether he was trying to shoot or pick out a team-mate – and it ricocheted off Maguire and into the path of Long. Turning sharply on the edge of the six-yard box, the Republic of Ireland international speared a low shot that Hamer, dashing from his line, kept out with an instinctive save. It was another reprieve for a Leicester team that remained pedestrian in possession and devoid of ideas going forward.

Finally Leicester conjured up something to test Southampton. Marc Albrighton picked out Jamie Vardy’s run in behind and the striker, in a moment reminiscent of that wonderful goal he scored against West Brom last month, let the ball drop over his shoulder and connected with a first-time volley that McCarthy tipped over the bar. That, however, was as good as it got for Leicester. – Guardian service