South Korean dribbles from his own half to score, Crystal Palace are held at Watford 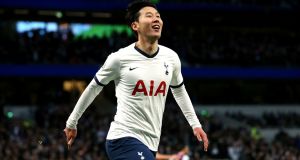 Two classy strikes by Harry Kane and a sensational solo goal by Son Heung-min powered a dominant Tottenham Hotspur to a 5-0 thrashing of Burnley, the third straight Premier League defeat for the visitors.

Burnley’s defence was brutally exposed from the beginning as Kane drifted across the middle and smashed an unstoppable shot from the edge of the area after just five minutes.

Lucas Moura doubled their advantage four minutes later after Son caused havoc with a dribble into the box. Despite his shot being blocked, Burnley failed to clear the danger and Brazilian Moura poked the ball over the line at the far post.

Son made it three with a wonder strike in the 32nd minute, picking up the ball deep in his own half before embarking on a searing run through the heart of the Burnley rearguard, and this time he made no mistake as he confidently stroked the ball home.

Kane exploited more bad Burnley defending early in the second half as he again cut in from the left and rifled the ball into the top corner for his eighth goal in nine games against Burnley.

For all the individual brilliance on show, Tottenham’s fifth in the 74th minute was a team effort as they once again sliced open the hapless Burnley defence before Moussa Sissoko’s controlled finish completed the rout.

Struggling Watford snapped a string of three straight defeats with a 0-0 draw against Crystal Palace in a scrappy Premier League clash at Vicarage Road on Saturday.

Watford caretaker Hayden Mullins’s final game in charge only highlighted the overall improvement required at the bottom club as new boss Nigel Pearson prepares them for a trip to leaders Liverpool next Saturday before Manchester United come calling.

In an ill-tempered first half of few clear chances, Palace had the opportunity to break the deadlock in the ninth minute when midfielder James McArthur fired a volley from close range but his effort failed to test Watford goalkeeper Ben Foster.

The hosts could have made Palace pay for that miss when winger Ismaila Sarr, who looked lively throughout on the right flank, met defender Kiko Femenia’s cross to the near post but the 21-year-old was unable to direct his shot on target.

Watford started the second half more aggressively and went close when forward Gerard Deulofeu’s shot from distance drifted inches away from goal in the 53rd minute. They could have stolen the points late on but for goalkeeper Vicente Guaita’s heroics.

The result denied Palace a third consecutive league win but Roy Hodgson will be pleased with his defence for keeping another clean sheet -- their third in as many matches -- ahead of next weekend’s home game against Brighton & Hove Albion.