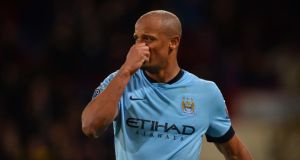 Manchester City’s Vincent Kompany is a doubt for the Manchester derby on Sunday.

Saints’ Filip Djuricic is out with an ankle injury but fellow midfielder Steven Davis returns after an ankle problem, as does defender Florin Gardos who has been struggling with an unspecified knock. Keeper Fraser Forster has undergone knee surgery but Jay Rodriguez could be back from his long-term knee problem before the end of the season.

Sunderland midfielder Sebastian Larsson is suspended but Jack Rodwell returns to the squad after a hamstring problem and Will Buckley has recovered from knee trouble. Defender Wes Brown (knee) and midfielder Emanuele Giaccherini (ankle) are still sidelined.

Veteran full-back Angel Rangel is in line for his first Swansea start for more than two months, with Kyle Naughton ruled out for the rest of the season after damaging ankle ligaments. Winger Jefferson Montero could make the bench after a hamstring injury.

Kyle Walker and Hugo Lloris are absent for Spurs and Jan Vertonghen is a doubt - right-back Walker has a foot injury while keeper Lloris is sidelined by knee trouble. Vertonghen (virus) is one of several doubts for a game which sees striker Harry Kane again captain the side.

Defender Craig Dawson is set to return for West Brom after a ban but midfielder Youssouf Mulumbu starts a suspension of his own. Keeper Ben Foster (knee) is a long-term absentee while Callum McManaman is not yet fit despite closing in on a comeback after foot trouble.

West Ham have forward Enner Valencia available after a toe injury. Defender James Tomkins has undergone shoulder surgery and hopes to be in contention before the end of the season but striker Andy Carroll (knee) and defender Doneil Henry (hamstring) are out.

United’s Chris Smalling is back in contention after illness but Luke Shaw will not feature after a hamstring injury and fellow defender Jonny Evans is banned. Striker Robin Van Persie will not be risked after ankle trouble, while midfielder Andreas Pereira is on Brazil Under-20 duty.

Vincent Kompany is doubtful with a hamstring injury — the City captain felt the muscle tighten during the defeat at Crystal Palace and will undergo a fitness test. Strikers Wilfried Bony (ankle/knee) and Stevan Jovetic are also out, as is defender Dedryck Boyata (knee).

QPR defender Richard Dunne (knee) is close to a return but won’t be considered with fellow centre-back Rio Ferdinand also absent with an unspecified knock. Eduardo Vargas, Leroy Fer and Alejandro Faurlin (all knee) and Yun Suk-young (concussion) are other casualties.

Reds defender Mamadou Sakho is out with a hamstring injury and Martin Skrtel and Steven Gerrard are suspended. However, Emre Can has served a ban of his own and striker Daniel Sturridge should be fit after complaining of muscle tightness. Boss Brendan Rodgers will wait to see if Mario Balotelli has recovered from illness.