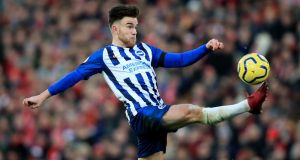 Burnley striker Jay Rodriguez will be available despite breaking a finger.

Jonjo Shelvey (calf) and Miguel Almiron (hamstring) are doubts for Newcastle as head coach Steve Bruce faces up to an injury crisis.

Fellow frontman Allan Saint-Maximin is expected to be sidelined for a month with a hamstring tear.

Fikayo Tomori will not feature due to a minor hip problem.

Fit-again Antonio Rudiger is likely to continue in central defence in his absence, while Ruben Loftus-Cheek continues his recovery from a long-term heel issue.

Bournemouth have been dealt an injury blow after it was revealed that Nathan Ake faces six weeks on the sidelines.

The defender was substituted with a hamstring injury during Bournemouth’s 3-0 defeat against Liverpool last weekend. The former Chelsea player will not be available again until next year.

Matty James (Achilles) remains a long-term absentee for Rodgers’ side but is back in training.

Norwich manager Daniel Farke has no new injury concerns as his struggling side look to avoid a third straight defeat.

Club captain Grant Hanley has returned to training following three months out with a groin problem, and the Scotland defender could be back in contention for the Christmas schedule. Swiss forward Josip Drmic (hamstring) continues his own rehabilitation, along with centre-back Timm Klose (knee).

Sheffield United boss Chris Wilder will hope to have an unchanged squad. Wilder reported “a few tight bodies” following the win at Norwich on Sunday but stopped short of revealing any new injury issues.

Tyrone Mings (hamstring) misses the trip to Bramall Lane, but left-back Matt Targett is available after a knock.

West Ham should have Aaron Cresswell fit. Manuel Pellegrini will continue to be without goalkeeper Lukasz Fabianski (hip), playmaker Manuel Lanzini (fractured collarbone) and midfielder Jack Wilshere (groin) for the trip to the south coast.

Wolves are expected to revert back to the team which drew 2-2 with Brighton last weekend. Raul Jimenez is available after being suspended for Thursday’s 4-0 Europa League win over Besiktas while Diogo Jota, who scored a hat-trick after coming off the bench, will return to the starting line up. Morgan Gibbs-White (back) and Willy Boly (fractured leg) remain out for Nuno Espirito Santo’s side.

Tottenham will recall their big guns for the trip.

Harry Kane, Dele Alli, Jan Vertonghen and Serge Aurier were all rested for Wednesday’s Champions League game at Bayern Munich, but will come back at Molineux. Harry Winks is back in training, but Hugo Lloris, Tanguy Ndombele, Ben Davies, Erik Lamela and Michel Vorm are all injured.

Arsenal forward Nicolas Pepe will have his knee injury assessed.

Playmaker David Silva is also doubtful after missing the midweek Champions League game at Dinamo Zagreb after what manager Pep Guardiola described as a kick in the leg. Goalkeeper Ederson should be available again after illness but defender Aymeric Laporte and winger Leroy Sane (both knee) are long-term absentees.

Manchester United midfielder Jesse Lingard will be assessed (knock). Paul Pogba is out along with Eric Bailly and Timothy Fosu-Mensah. Nemanja Matic returned from a 10-week absence against AZ Alkmaar, while Diogo Dalot and Marcos Rojo are building fitness.

Everton have been dealt a double injury blow with Theo Walcott and Morgan Schneiderlin sidelined by calf injuries. Lucas Digne is a doubt after feeling tightness while training on Friday, while Fabian Delph, Yerry Mina and Seamus Coleman remain short of full fitness. Jean-Philippe Gbamin and Andre Gomes are long-term absentees.

Mamadou Sakho will sit out for Crystal Palace as he serves the second part of a three-match ban.

Brighton will give striker Aaron Connolly as much time as possible to prove his fitness ahead of the trip to Selhurst Park.

Connolly is a doubt after missing Albion’s draw with Wolves because of a groin problem, while winger Solly March remains sidelined by a similar issue. Seagulls midfielder Dale Stephens serves a one-match ban after collecting his fifth yellow card of the campaign. Winger Jose Izquierdo (knee) is still out.