Mark Clattenburg to stay in Premier League until end of season 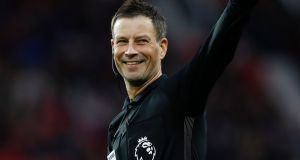 Mark Clattenburg: has reason to smile about a £500,000-a-year tax free role as head of referees in Riyadh, Saudi Arabia. Photograph: Carl Recine/Livepic

Mark Clattenburg is to remain a Premier League referee for the rest of the season, and will be in charge for West Bromwich Albion’s game against Bournemouth this weekend, before taking up his new position as head of referees in Saudi Arabia.

England’s leading match official announced last week that he was to leave his position on the panel of elite referees to succeed Howard Webb in the role in the Middle East but will serve out his notice period.

The 41-year-old, who was recently voted the best referee in the world at Dubai’s Globe Soccer Awards, had announced his intention to help “improve refereeing and the education of officials” with the Saudi Arabian Football Federation.

However, he remains under contract with Professional Game Match Officials Ltd (PGMOL) until the end of the current campaign and, having spoken with the referees’ manager, Mike Riley, over recent days, will be available until the summer.

Depending on commitments relating to his new role, he is likely to oversee at least four matches between now and the end of the campaign, when he will formally take up his £500,000-a-year tax free role in Riyadh. He is understood to have turned down an even more lucrative offer to work in China.

Despite appearing at a press conference in Saudi Arabia last week to explain his new role – he is succeeding Webb, who resigned from his position earlier this month to take up a similar job with Major League Soccer – it had never been formally confirmed that the County Durham official would cease to be available for Premier League fixtures.

His discussions with Riley, with whom he has endured a fractious relationship at times given his reservations over the internal politics at PGMOL, are understood to have been amicable and, with 13 rounds of games still to be played in the Premier League this term, Clattenburg will feature again over his three-month notice period. Officials are selected on a match-by-match basis, with his availability to be determined in a similar way.

“Mark set standards for others to follow,” said a PGMOL statement last week once news of the move to Saudi had been confirmed. “He has been a great asset to the English game and hopefully an inspiration to those who want to get into refereeing at the grassroots of the game. We understand this is an exciting opportunity for Mark.”

Ireland remain unchanged; Spurs hang in there thanks to Lloris 07:46
Sonia O’Sullivan: Four into one won’t go as Irish sailors vie for Tokyo place 07:00
Ireland wary of Peyper calling the tune as they head for Twickenham 07:00
David Brady says he has witnessed the illegal payments of GAA managers 06:00
Owen Doyle: Day of the jackal may be coming to an end 06:00