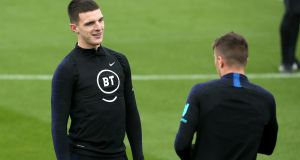 Gareth Southgate has offered support to Declan Rice after the West Ham midfielder revealed he and his family received online threats following his switch in allegiance from the Republic of Ireland to England.

Rice, who represented Ireland at youth level and won three caps at senior level before switching to the country of his birth this year, is the latest high-profile player to be targeted with abuse on social media. The 20-year-old, who won his fourth England cap in Saturday’s 4-0 victory against Bulgaria in qualifying for Euro 2020, said that he has received messages about people going to his home and added that his parents were also targeted.

“I’ve had people saying they’re going to come to my house ... yeah online,” Rice said in an interview with ITV News. “There’s a few bits I could go into but I don’t need to go into it, threats to my family, threats to me. It was tough, there has been some abuse. It was more for my mum and dad really.”

Southgate said he had feared there would be a negative reaction towards Rice following the West Ham player’s decision to represent England. The manager said: “My concern with the transfer across associations was always the implications for him and his family. That’s why I thought it was a very sensitive subject and I didn’t want to push a decision because there was always going to be a reaction, but he has dealt all the way through, since his decision, with that really calmly, very maturely, and we have to hope that everything kind of passes on now.”

Southgate, who is considering replacing Marcus Rashford with Jadon Sancho when England host Kosovo at St Mary’s this evening, added that the anonymity offered by social media is making abuse worse. “I think the reality of being in the public eye is, whether it’s through social media or other formats, people are subjected to abuse and I think people are naive if they don’t realise that has happened for years,” he said. “But social media is clearly amplifying that and I think it’s possible to have tighter controls. There is some responsibility for the companies involved to, for want of a better phrase, police that a little bit more strictly than they have.”

Jordan Henderson echoed calls by Rashford to force people to identify themselves when they create accounts on social media. “I didn’t realise people could just create accounts and you don’t know who it is,” the Liverpool midfielder said. “I think that’s one way forward. If someone could do something about that, that would be great and that would help.

“I think for the lads, they just need to be sensible with it and not read too much into it. I think it’s good to interact with the fans who support them, encourage them and want them to do well, but you’re also going to get people who are going to criticise you and you’ve just got to get on with it. Don’t read the comments.”

England have won their first three qualifiers in Group A and Southgate is likely to tweak his side against Kosovo, who have eight points from four games after beating the Czech Republic on Saturday. Trent Alexander-Arnold is expected to replace Kieran Trippier at right-back and Sancho is in line to start alongside Harry Kane and Raheem Sterling in attack.

Sancho, who came off the bench for Sterling on Saturday, has been in scintillating form for Borussia Dortmund and Southgate wants to give opportunities to the 19-year-old. “He’s confident in his own ability,” he said. “I said when I named the squad, he’s not a player we’re looking to hold back. He’s real competition. He’s very diligent in his work, as well as the fact that he’s exciting in his ability to beat people.”