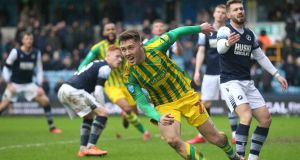 Championship leaders West Brom made light of Storm Ciara as they breezed past Millwall with a 2-0 win at The Den to move four points clear at the top of the table.

On-loan Benfica midfielder Filip Krovinovic put the Baggies ahead in style before half-time while 20-year-old Dara O’Shea scored his first professional goal late on to seal victory for Slaven Bilic’s side.

Having gone seven league games without a win between mid-December and January, West Brom had 29 shots on goal compared to Millwall’s seven as they followed up last Saturday’s victory over Luton in style.

The visitors dominated early on and should have gone ahead when Matheus Pereira smashed a low effort off the foot of the post four minutes into his return from a three-game suspension.

Wallace had another golden opportunity midway through the first half but blazed over Johnstone’s bar after latching on to Mahlon Romeo’s throughball.

The visitors missed an even better chance soon after when Kyle Bartley poked an effort wide from point-blank range after Millwall defender Shaun Hutchinson miscued his clearance.

Despite the conditions, the league leaders were constantly able to create chances, showing the creativity that Gary Rowett’s side lacked throughout.

Having been played through on goal by a pin-point Pereira pass, Hal Robson-Kanu failed to test Millwall goalkeeper Bartosz Bialkowski with a low shot.

With half-time approaching, Krovinovic’s delivery across the face of goal missed all four of his team-mates in the box.

However, the midfielder produced something special to give the Baggies’ the opener they deserved three minutes before the break. He brilliantly cut inside Romeo before firing low into the bottom corner past Bialkowski from 20 yards.

Robson-Kanu’s wasteful afternoon in front of goal continued when he blazed onto the roof of the net from four yards shortly after the break, before Romeo’s deflection diverted Pereira’s goal-bound shot wide.

Millwall had won their previous three league games at The Den — their best run in the Championship since 2011 — but Wallace’s free-kick in the first minute of stoppage time was the only time they truly tested Johnstone.

1 Gerry Thornley: Wild reactions to this Ireland team as fickle as the wind
2 Cheltenham keeping a watching brief on coronavirus
3 Five Golf Classics for you to tee up at in 2020
4 Dan Tuohy explains ‘rotten to the core’ comments
5 England and Eddie Jones at the vanguard of rugby’s hybrid era
Real news has value SUBSCRIBE