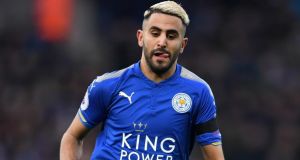 Riyad Mahrez is not expected to play in Leicester’s match against Swansea on Saturday and could remain out of the picture for some time as the club try to deal with the damaging fallout from Manchester City’s failed attempt to sign the winger on transfer deadline day.

Mahrez is bitterly upset that he missed out on a move to the Etihad after Leicester rejected a financial package worth around £65m (€74m) for him and it is understood that the 26-year-old is feeling so low that he is not in the right frame of mind to play.

Although the Leicester players reported for training on Thursday, for a light session in the wake of their 2-1 defeat at Everton, the Algerian was nowhere to be seen for the third day in succession. Claude Puel, Leicester’s manager, said on Wednesday that the club would help Mahrez “come back with a smile”, yet that looks like being much easier said than done.

Mahrez was clearly hell-bent on joining Manchester City and playing for Pep Guardiola. He failed to show up for training on Tuesday, the day before the Everton game, and did not travel to Goodison Park 24 hours later, when City eventually withdrew their interest in the player after Leicester demanded a fee in the region of £80m (€91m).

From Leicester’s point of view, the current situation is now being viewed as extremely delicate, not least because it strays into territory that transcends football. In a statement released by an anonymous friend in the wake of the move collapsing, Mahrez was described as very depressed. Reintegrating Mahrez will be a challenge for Puel and no one can say with any certainty when that will take place because of the player’s strength of feeling about what has happened.

Although Mahrez has been through this process before, having submitted a transfer request in the summer and spent deadline day at an airport waiting for the phone call that never came, this time feels different, as Manchester City were ready to sign him.

As far as Leicester are concerned, the timing of the bid could hardly have been worse and has proved hugely disruptive at a critical point in their season, especially as the squad has just been trimmed after they allowed Islam Slimani, Leonardo Ulloa and Andy King to go out on loan. – Guardian