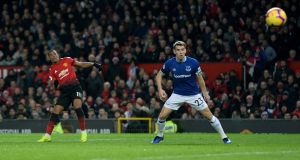 This was Manchester United’s best display so far this season and a second win in eight matches was much needed. While there was another concerning error from Paul Pogba, which led to Everton’s consolation, there were further spells of the quick and slick play United are showing more of as the season enters autumn.

Romelu Lukaku was dropped for the first time of his United career, joining another of Mourinho’s supposed A-listers, Alexis Sánchez on the bench. Fred’s inclusion was the sole change from the loss to Juventus, as Marco Silva fielded the same XI that beat Crystal Palace last weekend.

Before kick-off there was a minute’s silence to mark Remembrance Sunday and the helicopter crash at Leicester City’s stadium.

United’s first scare occurred inside five minutes. Bernard stood the ball up and Richarlison went to ground in the penalty area with Chris Smalling and Luke Shaw in attendance but referee, Jonathan Moss, was unmoved.

It sparked a pacey contest. The excellent Anthony Martial took on Séamus Coleman but could not outstrip him and at the other end Gylfi Sigurdsson’s whipped ball had Ashley Young and Bernard vying for it.

Marcus Rashford took Lukaku’s berth up front but his opening contributions did not augur well. The ball bounced away from him and when Pogba surged forward and passes to the centre-forward an attempted backheel found no one and made him appear hapless.

Martial looked the precise opposite when skating past Coleman and putting the ball on Juan Mata’s head. While the Spaniard’s attempt was straight at Jordan Pickford the goalkeeper had to be sharper when Martial fired a rocket at him moments later.

The Frenchman’s next contribution was telling as he skipped past Idrissa Gueye, the midfielder stuck out a leg, and over he went. Moss awarded the penalty and Gueye, already booked, was lucky not to be sent to the changing rooms. United’s designated taker is Pogba and, after his trademark stuttering run-up, Pickford saved mid-height to his right only for the Frenchman to roll home the rebound.

United soon had the ball in the net again but this was disallowed: Rashford was offside. Once more, though, it was Martial who had done the damage, slicing through Everton.

United were going at the visitors in a near-irresistible red wave with Fred taking aim from afar and Martial and Rashford threatening from close range.

Yet sloppiness can be costly and when Nemanja Matic was outmuscled by Sigurdsson and the Icelander passed and continued his run to connect with a header, De Gea was grateful the ball was directed at him.

By the close of the half United were relieved to remain ahead – Everton had gone close again when Theo Walcott caused De Gea to beat away a shot by his left post.

When the second half started Richarlison came close to capitalising on a typical Pogba error. From Luke Shaw’s throw-in the midfielder’s pass in-field went to Gueye. He hit the ball to the Brazilian forward and De Gea, yet again, saved superbly to his left.

Shortly afterwards United doubled the lead, this time via a peach of a finish from the outstanding Martial. Pogba swept the ball left and the attacker hit a right-foot shot that bent inside Pickford’s left post – his fifth in 11 games.

Rashford’s low confidence was illustrated when presented with a simpler chance. A clumsy touch made the angle difficult and his effort was too close to Pickford. On 65 minutes he was replaced by Lukaku.

Mourinho’s have been criticised for their ponderousness but there was a sweet rhythm to a sequence that took in Mata, Matic, Shaw, Martial and Young and ended in a corner.

Pogba’s tendency to make pivotal mistakes – he also made one here against Wolves – showed itself when Everton pulled one back. A fancy flicked reverse pass aimed at Mata was pounced on by the Everton midfield and an incisive move ended with Smalling conceding a penalty for a late tackle on Richarlison. Up stepped Sigurdsson to make it 2-1. Lukaku fluffed a chance to register for a first time since mid-September before Martial spurned a one-on-one but though hanging on a little come the end United did, at the final whistle, deserve victory.